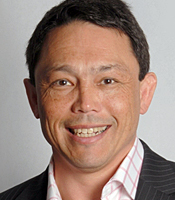 Rory Underwood has been a prolific and spectacular scorer of crucial tries for England in the team's relentless surge to the top of world rugby in recent years.

He occupies a unique position in the game as Britain's second most capped player and highest ever try scorer. Eighteen years in the RAF have brought him the rank of Flight Lieutenant After tours flying with Canberras on 360 Squadron and the Hawk jet with 100 Squadron.

His last tour was flying with 55 squadron after completing a ground tour. With Tony and Rory Underwood on either wing, England had two brothers in the same side for the first time since 1938.

Rory's interests also include swimming, golf and films. He branched out into motivational speaking and has proved a great success with many major blue chip companies. In addition to this, Rory Underwood has now left the RAF and has set up a management Development Consultancy with former Gulf War POW John Peters, providing a unique blend of teamwork and leadership.

Clients often ask about purchasing books for giveaways and delegate packs. Below you’ll find a selection of products by Rory Underwood. Click the images to view on Amazon's website. For bulk orders, please speak with your Booking Agent.

How to book Rory Underwood for your event