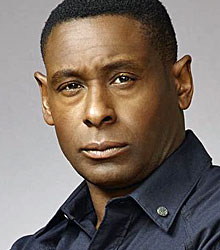 A highly acclaimed, loved and respected actor all around the world, David Harewood has been gracing our television screens for over 30 years, and more recently presenting his groundbreaking documentaries.

HBO’s Homeland, The Night Manager, Man in The High Castle, Supergirl and Blood Diamond are just some of the incredible TV shows and films that he has worked on alongside names such as Laurence Fishburne, Leonardo DiCaprio, Claire Danes and Damien Lewis.

David has had an illustrious theatre career too and made history in 1997 playing The National Theatre’s first ever black Othello.

He was born in a small town on the outskirts of Birmingham in 1965, to parents Romeo and Mayleen from Barbados, who moved to the UK in the fifties and sixties as part of the Windrush Generation.

David’s journey into acting isn’t what most people expect. He recalls being the classroom clown, often thrown out for being naughty. He applied to RADA, got in, and moved to London. This is the part where the cliché “and the rest is history” is declared, however for David, history’s still very much in the making.

As a director, David Harewood has always had a natural flair for writing, often being commissioned to explore personal pieces for publications like The Guardian and The Telegraph, covering topics from racial inequalities to mental health.

It was therefore no surprise that after the success of his ‘Psychosis and Me’ documentary, and its overwhelmingly positive impact and connection with audiences that he was then approached by some of the most prestigious publishing houses to secure his first ever memoir. In 2021, David wrote ‘Maybe I Don’t Belong Here: A Memoir of Race, Identity, Breakdown and Recovery’, published by Pan Macmillan.

Throughout his career David has filmed all around the world from Los Angeles to Vancouver, South Africa and Morocco, but home will always be in London with his wife, two daughters and their cockapoo Seb.

Clients often ask about purchasing books for giveaways and delegate packs. Below you’ll find a selection of products by David Harewood. Click the images to view on Amazon's website. For bulk orders, please speak with your Booking Agent.

How to book David Harewood for your event