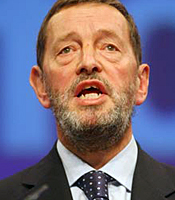 As Home Secretary at the time of the 9/11 attacks, David Blunkett served through some of the most testing times in British Politics. The turbulence was not confined to his political life, either. Few senior politicians have experienced quite so many ups and downs, and none have achieved high office having been blind since birth.

After leading Sheffield City Council (described by a local Tory as 'The People's Republic of South Yorkshire'), David Blunkett entered Parliament and held shadow portfolios in health, education and employment. Then as Labour Party Chair he became a key player in the development of New Labour - distancing himself once and for all from the 'loony left'.

When Tony Blair came to power David Blunkett was appointed Secretary of State for Education and Employment - where he launched the Learning & Skills Councils, created Job Centre Plus and oversaw the Equal Opportunities Commission, The Commission for Racial Equality and established the Disability Rights Commission. Later as Home Secretary he took responsibility for security, immigration and policing. He also attracted controversy by introducing a raft of measures to combat the threat of terrorism.

Since leaving the front bench David has continued to inform policy-making on the voluntary sector, social mobility and affordable credit. He has also published The Blunkett Tapes (sub-titled My Life in the Bear Pit), written a Sun column and appeared on Celebrity Mastermind - where he chose Harry Potter as his specialist subject.

Away from politics, David Blunkett's interests include poetry, walking and music. He has also written about wine and travel.

David Blunkett is a popular conference and after dinner speaker, giving an insider's view on the political landscape, he talks with authority on managing change, social responsibility and the benefits of diversity.

His own story is one of overcoming considerable adversity. He is also a genuinely engaging and surprisingly revealing after dinner speaker, with a fund of anecdotes about Labour's years in power.

Clients often ask about purchasing books for giveaways and delegate packs. Below you’ll find a selection of products by Rt Hon Lord David Blunkett. Click the images to view on Amazon's website. For bulk orders, please speak with your Booking Agent.

How to book Rt Hon Lord David Blunkett for your event