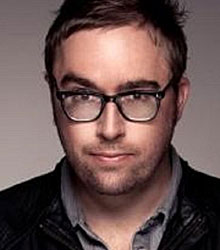 Danny Wallace is a Sunday Times bestselling author and award-winning journalist, whose work has appeared in publications such as the Guardian, the Scotsman and the Independent.

His first book, Join Me, was described as a 'word-of-mouth phenomenon' by The Bookseller and 'one of the funniest stories you will ever read' by the Daily Mail.

His column in ShortList magazine reaches more than 1.3 million readers weekly. He was the PPA Columnist of the Year 2011 and the Arqiva Radio Presenter of the Year 2012 for his work as the host of the triple Sony Award-winning Xfm Breakfast Show with Danny Wallace.

Born in Dundee, Scotland, Danny Wallace began writing reviews for video game magazines at the age of 13 for school work experience: a reviewer had become ill and so Wallace was given the opportunity to review a game. At 18 he started writing comedy.

At 22 he became a BBC producer and was part of the team behind the British Comedy Award-winning Dead Ringers and the critically acclaimed cult hit The Mighty Boosh.

Danny’s big break came in 1999 when he challenged his then flatmate, comedian Dave Gorman, to find 54 other people called Dave Gorman from around the globe. An award-winning stage show and BBC television series followed.

In 2003, Danny’s aforementioned book Join Me was published. He next wrote a short book called Random Acts of Kindness: 365 Ways To Make the World A Better Place. It includes many humorous Random Acts of Kindness (RAoK) ideas, such as Contradict Demeaning Graffiti, and Hide a surprise under someone's pillow. (Horses' heads are discouraged.)"

His second solo book, Yes Man, was published in 2005, where he describes how he spent six months "saying Yes where one would have said No", to make his life more interesting and positive. In this book he shows the tribulations and mischief that he got up to while he said yes to any question or proposal. A film adaptation was developed with Warner Bros. and stars Jim Carrey, which was released in 2008.

Danny Wallace contributed ideas to and appeared in the hidden camera show World Shut Your Mouth. He has presented a few shows for Sky including the first series of Conspiracies..., Secrets of the CIA and Danny Wallace's Hoax Files. He has also presented Castaway on BBC1, co-presented Test the Nation with Anne Robinson (replacing Phillip Schofield) and appeared on a celebrity spin-off episode of the BBC's Mastermind.

Danny Wallace is an insightful and very funny after dinner speaker and an ideal choice as awards host for corporate and private events.

Danny Wallace delivered the awards very professionally and had fun with the photos! There were 30 awards to hand out and he did really well to keep the audience engaged. He also stayed to sign books at the end in the bar for everyone and had a chat with some of his followers/fans. He was lovely to work with, professional and fun.

Danny Wallace was a fantastic host - he wrote a bespoke opening which went down well and managed the presentation with skill, confidence and was great fun throughout. I can’t recommend Danny as a host highly enough

Clients often ask about purchasing books for giveaways and delegate packs. Below you’ll find a selection of products by Danny Wallace. Click the images to view on Amazon's website. For bulk orders, please speak with your Booking Agent.

How to book Danny Wallace for your event