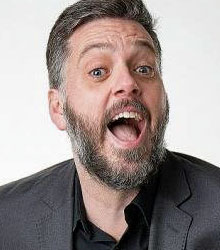 lain Lee started his career as a stand up comic playing comedy venues around London. He’s been a familiar face on television since he got his first break co-presenting the 11 O’Clock Show.

Landing the job hosting Channel 4’s thrice weekly topical comedy show at the age of 25 allowed Iain to unleash his own brand of humour on the nation. As well as sitting behind the desk fronting the programme, alongside Daisy Donovan, Iain also wandered the streets, gently winding the public up with his unique take on the vox-pop.

After three series of The 11 O’Clock Show, Iain left to pursue other areas. He presented a video games documentary, Thumb Candy, where he travelled the world meeting the innovators in the world of computer entertainment. A series, Thumb Candy, followed and secured Iain’s place as one of the country’s most prominent gamers.

For a year, Iain hosted Channel 4’s breakfast show Ri:se, and took great delight in interviewing celebrities, reviewing the papers and singing R Kelly’s ‘Remix to Ignition’ almost every other morning. Iain’s performances on the show were loved by Vic Reeves and Bob Mortimer, so much so that Bob later cast Iain in TittyBangBang before writing a show for him and his former flatmate Mackenzie Crook.

His obsession for the TV show Lost allowed Iain to travel to Hawaii several times to interview the cast for Sky One, and record a weekly podcast that became an internet sensation.

As well as appearing on TV, Iain has made quite a name for himself on the radio. Spending 3 years on LBC before moving to Virgin and Absolute for a further 4 years. Between January and October 2011, Iain’s Absolute show podcasts had over 5 million downloads.

He then went on to host the Breakfast Show on BBC Three Counties and, in 2013 he was honoured to win the prestigious Nick Clarke for his challenging interview with the head of paediatric services at Bedford Hospital, beating stiff competition including Victoria Derbyshire, Krishnan Guru-Murthy and Kirsty Young. In 2014 he won Gold Award at the Radio Academy Awards in the Best Breakfast Programme category.

In the spring of 2016, Iain was unveiled as the host of the late-night phone in show on talkRadioPresenting Mon-Fri 10pm-1am, the show achieved over 1 million podcast downloads in its’ first 3 months and has won huge critical acclaim. It is unlike anything you will hear anywhere else.

He was the acclaimed host of the Big Brother Spin Off show ‘Big Brothers Bit on the Psych’ and can regularly be seen on Sky News where he reviews the Sunday papers.

In 2017, I’m A Celebrity became the next challenge and Iain took it on with aplomb. Eventually finishing 3rd overall, Iain came back from Australia to be greeted by an adoring public, a contract extension on his talkRadio show and a myriad of presenting opportunities including Good Morning Britain, Loose Women and The One Show.

How to book Iain Lee for your event