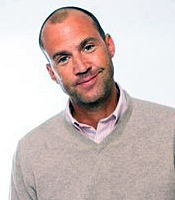 Johnny Vaughan's big break into television was on Channel 4 in 1993 where the public first saw his blend of quick-fire humour and impressions on the movie review show Moviewatch. Channel producers decided he was a natural in front of the camera and he fronted The Big Breakfast from 1997 until 2001, forming a partnership with Denise van Outen which proved extremely successful, pulling in large audience figures. In parallel he presented another movie show, The Johnny Vaughan Film Show. Johnny was quickly rising to become one of the country's best-loved presenters.

In 2001 he transferred to the BBC to present a late-night chat show, Johnny Vaughan Tonight in the same vein of American shows by David Letterman and Jay Leno. In April 2004 he returned to the "zoo" format when he replaced Chris Tarrant as the presenter of the Capital FM breakfast show and this ran till 2011.

Johnny Vaughan has also been heavily involved with telethon charity drives such as Children in Need, Comic Relief and Sports Relief. In 2004 the BBC ran "a search to find the nation's best-loved sitcom" with a format that aped that of the 100 Greatest Britons. One celebrity championed each of the top ten sitcoms, presenting an hour-long special on why their favourite was the best. Vaughan was the presenter of the segment on prison-based sitcom Porridge.

Johnny is an avid supporter of Chelsea FC and is married to Antonia, whom he met aged 19 whilst working in the video store. They are married with two children Tabitha and Rafferty and live in south London with their dog Harvey.

How to book Johnny Vaughan for your event