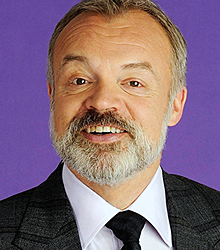 Graham Norton is one of Britain's leading comedians and television presenters. Rising from the London comedy circuit playing such renowned venues as The Comedy Store and Jongleurs, Graham took live chat shows to a new level with his, then somewhat controversial, hit Channel 4 show, So Graham Norton.

With the show airing late on a Friday night, the incredibly camp performer interviewed a host of A-list celebrities and bombarded them with questions that others dared to ask. Graham's show has won numerous awards including Best Talk Show - British Comedy Awards 1999. Graham himself has also won Best Newcomer - British Comedy Awards 1997, Gay Entertainer of the Year - Gaytime Awards 1999 and two BAFTA's at the 2001 award ceremony.

Graham Norton grew up in a small Irish town as Graham Walker. As a teenager he studied English and French at University College Cork but left and moved to San Francisco. He returned home and enrolled in drama school. It was then that he discovered there was already a “Graham Walker” on the books of the actors' union, Equity. So, he decided to change his name. That day, Graham Walker became Graham Norton, and more than thirty years later, there's not a person in Britain who hasn't heard of him.

Graham's BBC1 chat show is regularly watched by more than 3 million viewers and his sofa has hosted some of the world's most sought-after celebrities including Tom Cruise, Gwyneth Paltrow, Madonna, Daniel Craig, Judi Dench and Hugh Jackman. His Saturday morning Radio 2 show pulls in some of the highest audience figures on the airwaves. In 2009, he started hosting the BBC's coverage of the Eurovision Song Contest, with a brand new format, a role he took over from Terry Wogan.

When working the corporate entertainment circuit Graham Norton is at his best hosting the evening or compering award dinners and similar events. A true comic genius at work!

Clients often ask about purchasing books for giveaways and delegate packs. Below you’ll find a selection of products by Graham Norton. Click the images to view on Amazon's website. For bulk orders, please speak with your Booking Agent.

How to book Graham Norton for your event