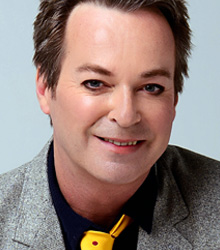 After graduating in Drama and English at Goldsmith's College, University of London, Julian Clary began working on the cabaret circuit in the early 80's, known as The Joan Collins Fan Club.

Julian Clary is a regular panelist on Radio 4's Just a Minute and is also the voice of the narrator in 'The Little Princess' animated series. A three part celebration of the life of Douglas Byng called The Byng Ballads was broadcast on Radio 4 in November 2010.

Julian continues to tour the UK and Australia with his one man shows. In 2010 he completed a 140 date tour of 'Lord of the Mince.' In 2013 he embarked on his 'Position Vacant - Apply Within' tour.

Roles on stage include Leigh Bowery in Boy George's 'Taboo' (2004, West End and national tour), the Emcee in Rufus Norris's Olivier Award winning production of Kander and Ebb's 'Cabaret' (2007 West End), and The Spirit of the Bells in 'Dick Whittington' together with Joan Collins at the Birmingham Hippodrome in the 2010/11 Pantomime season.

Thank you Julian for hosting my client's event for the second time running. The attention to detail with tailoring the intro and script was second to none and you really put in the effort that our awards deserved. Added to that, you're one of the loveliest and easiest hosts I've ever worked with, so thanks again for your help in making this night such a success.

The feedback was absolutely fantastic. Julian's performance was in one word “brilliant”.

Clients often ask about purchasing books for giveaways and delegate packs. Below you’ll find a selection of products by Julian Clary. Click the images to view on Amazon's website. For bulk orders, please speak with your Booking Agent.

How to book Julian Clary for your event