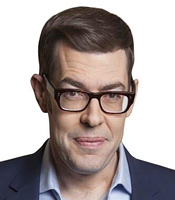 Despite a ‘proper’ day job as a television executive, Richard Osman is better known for co-presenting Pointless alongside Alexander Armstrong. An accomplished host in his own right, he delivers a mix of the obscure, the fascinating and the downright silly on the popular early evening BBC quiz show.

A friend of Armstrong’s since university, the pair’s chemistry contributes greatly to the show’s popularity with Alexander’s approachable presentation style and Richard the font of all pointless knowledge.

Away from the Pointless cameras, Richard Osman has worked as a producer behind the scenes on programmes including Deal or No Deal, 8 Out of 10 Cats, and Whose Line is it Anyway? He’s appeared on Have I Got News For You, Would I Lie to You?, and QI, and he’s guest hosted The One Show.

Richard also co-wrote The 100 Most Pointless Things in the World book.

Very polite and engaging; good phone call in advance of the dinner; asked a few things and played them back in the evening ... Thought audience reaction was excellent (they stayed with him, he was funny and good of him to finish with positive words on the industry, its contribution and its people). I would recommend him to others.

Clients often ask about purchasing books for giveaways and delegate packs. Below you’ll find a selection of products by Richard Osman. Click the images to view on Amazon's website. For bulk orders, please speak with your Booking Agent.

How to book Richard Osman for your event