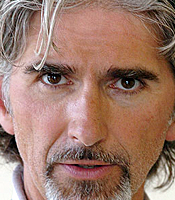 Damon Hill has enjoyed the thrill of speed since he got his first motorbike for passing his Eleven Plus. After a successful career in bike racing he switched to Formula Ford in 1984, graduating to Formula 3 in 1986.

Damon Hill's first break into Formula 1 came in 1991 when after some success in Formula 3 he became a test driver for the Williams Grand Prix team. He went on to partner Alain Proust on the Williams team for the 1993 season.

He became World Champion in 1996 driving the Williams FW18 to victory in eight races, coming second in two.

A year with the TWR Arrows Yamaha team followed in 1997, the year in which he was awarded the OBE.

1998 saw him joining Jordan-Mugen Honda and driving the team to its first victory at the Belgian Grand Prix.

Damon retired from Grand Prix racing in 1999. He continued to develop his passion for music, forming his own group, the Conrods in 2001 and has performed internationally in support of charitable causes.

He still gets to drive the greatest cars in the world since the launch of his super car club in 2001, P1 - a private members club which allows members to enjoy a stable of high performance cars without the burden of ownership.

How to book Damon Hill for your event