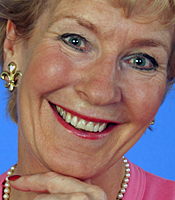 Christine Hamilton appears regularly on TV and radio, from entertainment to news and current affairs programmes. Her repertoire includes everything from 'Have I Got News for You', 'Bo Selecta', 'Harry Hill' and 'This Morning' to 'Any Questions' and 'Newsnight'. She also writes for newspapers, magazines and periodicals.

She has filled both Oxford and Cambridge Unions, wowed the boys at Eton College and enchanted countless other audiences with her wit, humour and fund of hilarious stories. She is in demand to speak at luncheons, dinners and gatherings of all kinds, equally at home with either male, female or mixed audiences, enlivening many an occasion with her charm and humour. A practised, entertaining and witty speaker, she lifts the veil on the discreet yet not-so-discreet World of Westminster and enthuses hilariously about her 'Great British Battleaxes'.

Christine acquired media celebrity overnight for the forceful support she gave her husband during his 1997 General Election campaign in the Tatton constituency. The Battle of Knutsford Heath was one of the high spots of the campaign. Descriptions of her ranged from the insultingly unflattering to the admiringly adulatory. She was called everything from The Wife from Hell to The Battling Lioness. Lampooned in countless articles and cartoons as a ferocious Battleaxe, she also aroused admiration for her spirit and chutzpah.

Christine and Neil currently live in London where they enjoy music, gardening, cooking and entertaining, which encompasses their overriding passion: the company of good friends.

Your slot went down a storm... your content was spot on as well as being very amusing... thank you for a great end to our conference.

Christine was wonderful, so enthusiastic and keen to engage with our guests. She arrived early and was there until after midnight. Already I am getting feedback saying how lovely it was that she was so available and happy to mingle with the guests... we struck it lucky with Christine! Her highly entertaining speech was pitched just right…

You received the biggest turn out I've ever known for a society at Eton, even though many other lectures were taking place simultaneously.... you managed to make most of the audience cry with laughter.

You left us uplifted, laughing and feeling very good about ourselves, as well as motivated and more confident in our ability to overcome life's little hurdles.

How to book Christine Hamilton for your event