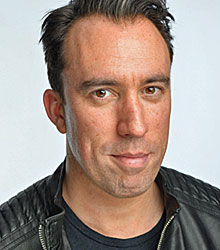 Christian O'Connell is one of the leading talents in UK commercial radio and an award winning DJ with eight prestigious Gold Sony Radio Awards.

Every weekday morning millions of people wake up to Christian O'Connell in his role as host of the Absolute Radio national breakfast show. His show is a whirlwind of celebrity interviews, cheeky banter and the kind of comedy capers that get listeners into work with a smile on their faces.

He is also known for co-presenting BBC Radio 5 live's Fighting Talk on Saturday afternoons – A hilarious look at the volatile world of sport where guests compete for points with their sporting punditry. Informed comments are rewarded but witless outbursts are penalised.

Christian O'Connell is also a TV presenter, writer and stand-up comedian. On TV Christian has presented shows for ITV, Sky One and Channel Five. He appeared on ITV Two's ‘Back on the Job' where he went back to being a bin man, local radio presenter and telesales operative. Christian has also made guest appearances on Loose Women, Something for the Weekend, and The Weakest Link, amongst others.

As a stand-up comedian, in 2013 Christian took his debut show ‘This is 13′ to the Edinburgh Comedy Festival. The show focussed on his race against time to complete a list of dreams made when Christian was 13. The show achieved great reviews and Christian will be returning to the Festival with his new show.

You united the room something which had never happened. You made the evening.

How to book Christian O'Connell for your event