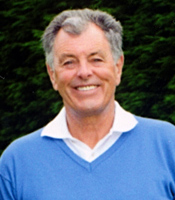 Sturdy, stocky and a bulldog of a golfer - that is, and always will be, Bernard Gallacher. This battle-hardened player from Bathgate in Scotland was the original young wonder of the PGA European tour, winning the PGA Championship just two years after turning professional in 1967. Thirteen more titles followed in between the demands of Bernard's other job as the club professional at Wentworth Club.

Bernard Gallacher played in every Ryder Cup from 1969-83. In the late '80's he helped Tony Jacklin before taking over the captaincy in 1991. Unlucky in his first year, Bernard won the Cup as Captain on his third attempt. His calm and collected leadership was vital to the European team's stunning victory at Oak Hill in New York State.

Following a quarter of a century as Club Professional, Bernard Gallacher left Wentworth at the end of 1996. In 1997, he spent more time with his family and played more golf. Bernard also commentated on the Ryder Cup for Sky and worked with various blue chip companies, particularly on their corporate entertainment where - following his time at Wentworth - he is regarded as a 'golf day specialist'.

Bernard turned fifty in 1999 and has played on the European Seniors Tour ever since where he is perhaps the biggest 'name'. Following several consistent years, Bernard finally won in July 2002 at the Mobile Cup held at Stoke Poges.

Bernard Gallacher is an ambassador in Seniors Golf for Callaway. He plays "Hawk Eye" woods as well as the X12 Irons. Bernard also launched his own golf academy at Selfridges in April 2002.

Away from the golf course, Bernard Gallacher presents highly successful corporate golf days and his Ryder Cup speech is highly regarded as an informative insight into the world's biggest golf event.

Thank you for helping to make our Specialties golf day at Wentworth such a success.

Bernard was fantastic! His stories about Ryder Cups were amazing...there aren't many people who can tell tales of beating Jack Nicklaus, but Bernard does it with style! Our guests loved every minute of it.

We would like to thank Bernard for being such a great host at our event. He couldn't have been more friendly and welcoming to our guests, who were absolutely thrilled to have such an insight into his Ryder Cup and European Tour experiences

Clients often ask about purchasing books for giveaways and delegate packs. Below you’ll find a selection of products by Bernard Gallacher OBE. Click the images to view on Amazon's website. For bulk orders, please speak with your Booking Agent.

How to book Bernard Gallacher OBE for your event