Hungarian silhouette troupe and winner of Britain's Got Talent 2013 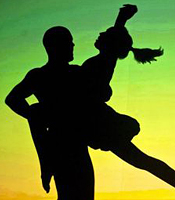 Book Attraction
add to shortlist
About

Attraction are the groundbreaking Hungarian silhouette troupe that won Britain's Got Talent in 2013.

Originally, the dance troupe was known for presenting ‘black light theatre'. Popular in Europe and in Prague specifically where it is used by many theatres, this is where performers dressed in black, and set against a black backdrop, become invisible but the brightly coloured props they hold - lit with powerful UV light tubes - are visible. Black art relies on the principle that the human eye cannot distinguish a back object against a black background when certain light conditions are met. Using this technique the performers are able to create remarkable spectacles and intricate seemingly impossible visual illusions.

However, for their participation in Britain's Got Talent they opted for routines using silhouette artistry, whereby dancers use a simple back light to project shadows of the dancers' bodies on to the screen to form seemingly impossible images and scenery in an emotional story board set to music.

Headed by dance troupe leader Zoltan Szucs, he began his musical career in the early 1990s, performing in rural Hungarian discos with a rap band called Enemy Squad. But his first taste of fame came after forming his group Hip-Hop Boyz. At one stage the band supported the late Michael Jackson, released two albums and became a household name in Hungary. Attraction are very popular in their homeland and their fellow countrymen avidly monitored their progress through BGT.

The theatre troupe has 12 members including a wide scale of contemporary dance artists from modern folk dancers, ballet dancers, hip hop, electric boogie, break dancers and jugglers. These artists, together with choreographer Zoltan Szucs guarantee the highest standard of performance. Their work and choreography are characterised by high standard and maximum commitment coupled with professional performance. They work with incredible accuracy, full concentration and the visual image dazzles the audience. The accord between visual image and music, the several years experience in the use of theatrical equipment, body awareness and mutual tolerance all contribute to the magic of production. Watching them, we can observe that each second has its weight, we can eyewitness a breathtaking picture of team work. Each performance has been rated as extremely successful.

Attraction Black Light Theatre and their silhouette artistry are ideal for corporate events - crossing all cultural boundaries and have no language barriers. The inspirational story behind the company is perfect for corporate messages. It's one of perseverance, creativity and imagination. The Attraction Black Light Theatre are living proof that anything can be accomplished with hard work and dedication, which is why many organisations are using Zoltan Szucs and ABLT to inspire and motivate their employees.

Music and routines can be customised to suit your business theme, and can incorporate your company's logo or products. Let Attraction Black Light Theatre inspire and motivate your employees, sales force, or business partners. So next time you are planning an important business event, or entertaining your clients and employees, consider the unique and global appeal of... Attraction!

How to book Attraction for your event