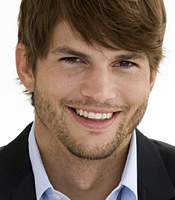 Ashton Kutcher is a Hollywood actor, producer and co-founder of Katalyst, a new breed of studio developing innovative content for TV, film and the social web. He has also successfully invested in several technology start-ups, some of which include Skype, Foursquare, Airbnb, Path and Fab.com. He is also a co-founder of the venture capital fund A-Grade Investments.

Based in Los Angeles, Katalyst is driving a radical shift in the way content is created and consumed. Founded in 2000 by partners Ashton Kutcher and Jason Goldberg, film credits include The Butterfly Effect, Guess Who, Spread and Killers.Television property credits include the hit series Punk'd, Beauty and the Geekand True Beauty. Digital media properties include programming for major brands such as the Levi's Curve ID campaign, Nikon's The Chase, Intel IdeaJam and United Nations – Malaria No More. In 2010, Katalyst was named one of the year's Top 50 Most Inspiring Innovators by Ad Age and one of Fast Company Magazine's Top 10 Most Innovative Companies.

Ashton Kutcher was born in Cedar Rapids, Iowa. During high school, he developed a passion for acting and appeared in school plays. Whilst at the University of Iowa he was approached by a talent scout and was recruited to enter the "Fresh Faces of Iowa" modelling competition. After placing first, he dropped out of college and won a trip to New York City to the International Modelling and Talent Association (IMTA) Convention. Following his stay in New York City, Ashton returned to Cedar Rapids, before relocating to Los Angeles to pursue a career in acting. He also signed with Next modelling agency in New York, appearing in adverts for Calvin Klein and modelled in both Paris and Milan.

He first gained recognition as an actor playing Michael Kelso on the hit comedy series That 70′s Show, which aired for eight seasons in the USA. Ashton went on to star in a variety of global box office hits on the big screen, including What Happens In Vegas with Cameron Diaz, A Lot Like Love with Amanda Peet, Valentine's Day,No Strings Attached with Natalie Portman and the cult hit Dude, Where's My Car. He currently stars in the CBS hit, Two and a Half Men.

In 2010, Ashton was named one of Time Magazine's ”Top 100 Most Influential People.” In 2011, Kutcher co-created The Demi and Ashton Foundation, to eliminate child sex slavery worldwide.

Ashton Kutcher is highly sought-after around the globe as an inspirational keynote speaker, especially to the younger generation on entrepreneurship, focus and commitment to achieving your ambitions and goals.

How to book Ashton Kutcher for your event