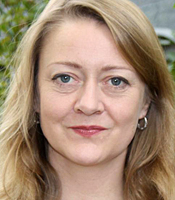 Annie Machon worked as an intelligence officer for the UK domestic Security Service, MI5, in the 1990s. During that time she was responsible for investigating political and terrorist targets, before resigning to help her former partner and colleague, David Shayler, blow the whistle on the crimes, incompetence and lack of accountability of the spies. The story made head­lines around the world at the time. They had to go on the run around Europe and live in exile in France for 3 years.

Her bestselling book, Spies, Lies and Whistleblowers: MI5, MI6 and the Shayler Affair was published in 2005.

Drawing on her varied experiences, Annie is now a public speaker, writer, media pundit, political campaigner, and PR consultant. She has a rare perspective both on the inner workings of governments, intelligence agencies and the media, as well as the wider implications for the need for increased openness and accountability in both public and private sectors.

Annie read Classics at Cambridge University and then began a career in publishing. In 1991 she was recruited by MI5 where she was posted to their political and counter-terrorism departments.

Annie Machon is a recognised international public speaker on a variety of issues: security and intelligence, ethics and citizenship, corporate social responsibility, the war on terror, the war on drugs, press and media freedoms, secrecy legislation, civil liberties, totalitarianism and police states, accountability in government and business.

More informally, for after dinner engagements, Annie is available to recount her fascinating personal story “On the Run”.

We were excited that Annie was joining us at our conference entitled "The Morality of Business". She delivered a captivating presentation from the heart, only possible for someone who has been through a whistle-blowing experience. It was relevant and memorable to our business community.

Annie is the one speaker your privacy / freedom minded event cannot do without. Her personal experience with the governments darkest tactics on extracting and keeping information make for very high quality talks that touch and open the eyes of those listening. Annie's on stage performance can only be described as "fluent, clear and passionate" no matter what the subject of the talk is. Annie takes the time to communicate her idea's and tries to incorporate any ideas and topics into her talk, even if they are proposed at a very late stage.

Annie Machon gives a fluent, accessible talk on the history of the British security services and the consequences of their actions for civil liberties. She is an excellent and entertaining speaker.

Clients often ask about purchasing books for giveaways and delegate packs. Below you’ll find a selection of products by Annie Machon. Click the images to view on Amazon's website. For bulk orders, please speak with your Booking Agent.

How to book Annie Machon for your event