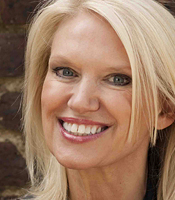 Anneka Rice started her career at the BBC working for The World Service on The World Today and Twenty-Four Hours. Aged 19, after two years of production experience, she bought a one-way ticket to Hong Kong where she spent the next three years working for a PR agency, presenting the evening news and dubbing kung-fu movies.

She authored a successful non-fiction book, A Children's Guide to Hong Kong and also a weekly motoring show for RTHK called Wheelbase. She also worked as a fittings model for various jeans' manufacturers and appeared in many commercials. Her work took her all over Asia.

By the time she returned to the UK with five years of broadcasting experience Anneka Rice was still only 22. She shot to fame as the 'Sky-Runner' in Channel 4's Treasure Hunt, still its highest rated programme. This firmly established Anneka as Britain's No.1 Action Girl and during the 1980s and ‘90s she was rarely off the TV screen.

Anneka presented Sporting Chance, TVAM, Driving Force, Wish You Were Here, Capital Woman, Combat, Holiday, The Royal Variety Performance and numerous other shows. Before 'health and safety' had been invented, Anneka jumped out of planes, landed helicopters on submarines, potholed in treacherous conditions, climbed mountains and generally risked life and limb on a weekly basis.

Anneka went on to devise the award-winning Challenge Anneka. Each week the Challenge team took on a seemingly impossible task which had to be completed entirely with the help of volunteers and donated materials and supplies. The projects included the renovation of a Romanian orphanage, the equipping of a refugee camp in Malawi, the rescuing of lions and chimpanzees, and the building of bridges, soup kitchens, holiday camps for disadvantages youngsters, centres for the disabled, the list goes on. The Challenge programme raised millions of pounds worth of supplies and services for charities and communities and has left an amazing legacy around the world.

In 1995, after completing 61 Challenges all over the world, Anneka decided to change her life completely and took an extended sabbatical to raise her children and study at Chelsea College of Art. During this time she totally dropped out of public life and concentrated on her painting.

She then developed the Challenge format for ABC in America with Erin Brockovich taking on Anneka's role. Anneka played her first drama role in the BBC drama Absolute Power with Stephen Fry.

In more recent times, she has dipped into new projects and went to the Arctic to investigate global warming and the plight of the polar bears for an ITV Special. She has also appeared on QI, The Graham Norton Show, Hell's Kitchen, Come Dine With Me, Blockbuster and Comic Relief. Anneka was also one of the reporters for the Jubilee Pageant.

Anneka Rice's theatre work includes a successful tour of The Vagina Monologues and many pantomimes. Her radio work includes The Waiting Game for Radio 4, a nine-part series on pregnancy; Start the Week and Loose Ends and she played herself in The Archers when the residents of Ambridge challenged Anneka to renovate their village hall.

She has also been a regular stand-in on Radio 2 and presented In the Life Drawing Class for BBC Radio 4. She is a regular contributor to The Mail on Sunday's travel section and also writes on health issues.

Clients often ask about purchasing books for giveaways and delegate packs. Below you’ll find a selection of products by Anneka Rice. Click the images to view on Amazon's website. For bulk orders, please speak with your Booking Agent.

How to book Anneka Rice for your event