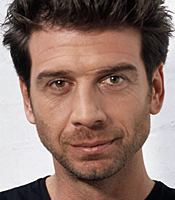 A true 'one-off' - Nick has talent, charisma and sheer personality - all laced with an appealing and infectious sense of humour - witness BBC's DIY SOS, RTS Award Winning City Hospital, All The Right Moves, Put It To The Test and his contributions to BBC's Millennium Night, Chef SOS (BBC Pilot) and TV Revealed (2 x series 2000).

Add to this ITV's ground - breaking live news show Bafta nominated Straight Up as well as Wish You Were Here and another facet emerges.

Nick is master of live TV - he's done more than most! He has a journalist's ability to think on his feet, grasp the salient points and with utter professionalism introduce appropriate wit and wisdom from a totally unique (and often unexpected!) standpoint.

Nick brings the eye of a talented director to much of his feature work - His direction of the prestigious film 30 Years of ITV is a landmark. His films for Meridian TV's News and Coast To Coast, ITV's Road Show and Straight Up and BBC's Put it To The Test have been works of art - art applied also to the likes of GMTV, BSKYB and Anglia TV.

With a CV and style honed here, the US (CIO Arizona) and Down Under (C4), with 5 series of his own Ridgeriders for Meridian TV (riding historic trails with celebs on motorbikes) under his helmet, projects like RTS Award winning: Absolutely Loaded (Carlton) and his deep knowledge of sport, Nick is one unique talent.

How to book Nick Knowles for your event