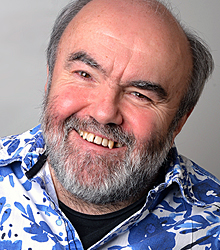 Andy Hamilton is a TV favourite who has made a name for himself over the years with his original comedy writing. Whether he is dealing with family life in Outnumbered or politics in Ballot Monkeys, a ‘real-time' sitcom about the 2015 General Election, Andy just gets it right.

Andy is a regular on Radio 4 panel shows and TV quizzes such as Have I Got News For You and QI. Starting out with The Two Ronnies, Smith and Jones and Not The Nine O'Clock News, Andy went on to create Drop The Dead Donkey. With co-creator Guy Jenkin, he wrote sixty episodes and the series won a BAFTA, two Emmys and three Writers Guild Awards.

How to book Andy Hamilton for your event