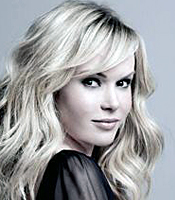 Amanda Holden is riding high as one of the judges on the hugely popular and BAFTA award winning Britain's Got Talent alongside original fellow judge Simon Cowell and newcomers Alesha Dixon and David Walliams. As one of the highest rating TV shows in the UK, BGT has pulled in over 20 million viewers for the ITV1 show.

With a vast career spanning television, theatre, film and presenting, Amanda works regularly on both sides of the Atlantic reporting various show business news events as the UK correspondent for The Early Show on the CBS network.
Leading roles in TV comedy are extensive and include Kiss Me Kate, Know Where You Live with Simon Pegg, Mad About Alice and Big Top for BBC1 as well as The Grimleys for ITV1. Amanda also co starred alongside Bill Nighy and Tom Courtenay in the classic comedy Film Ready When You Are Mr McGill.

Leading roles in TV drama include three hugely successful series of ITV1's Wild at Heart; BBC1's Happy Birthday Shakespeare; Hearts and Bones opposite Damien Lewis; ITV1's The Hunt and Now You See Her. Further drama credits include three series of the BAFTA nominated BBC1 hit Cutting It and The Miss Marple thriller 4.50 From Paddington.

Theatre credits include The Sound of Music, Arsenic and Old Lace and The Importance of Being Ernest. Amanda was nominated for an Olivier Award for her role as Millie in Thoroughly Modern Millie on the West End stage in 2004.
Amanda's presenting credits include the prestigious Children's Champion Awards; A Night of Heroes; Celebrating the Carpenters; The National Music Awards; When Britain First Had Talent; Greasemania and The Door. She also presented ITV's three part programme Amanda's Holden's Fantasy Lives as well as a midwifery documentary Out Of My Depth.

A favourite at award ceremonies and corporate events, amongst others Amanda Holden has hosted The Olympic Ball, The Collars and Cuffs Ball for Battersea Dogs Home, The Childline Ball and The Firefighter Bravery Awards. Amanda has also worked extensively with top brands including Aspinal, Robinsons, Accor Hotels, Kenco and Pedigree and was also seen playing Penelope Belcher in the hugely popular Tesco ads alongside Fay Ripley and Mark Addy.

In 2011 Amanda Holden was announced as the new face of TrimSole toning footwear, resulting in a record number of sales for the brand. Most recently, she spearheaded the launch of Vodafone's JustTextGiving service, taking part in a fundraising bake-a-thon for Great Ormond Street Hospital.

Clients often ask about purchasing books for giveaways and delegate packs. Below you’ll find a selection of products by Amanda Holden. Click the images to view on Amazon's website. For bulk orders, please speak with your Booking Agent.

How to book Amanda Holden for your event