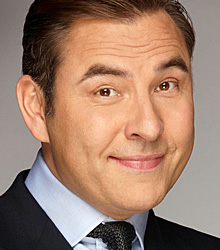 Household name comedian, actor, children's author, anarchic judge on Britain's Got Talent and record-breaking long-distance swimmer, David Walliams is truly a man of many talents. He was propelled to fame with the monumentally successful Little Britain which he co-wrote with comedy partner Matt Lucas, the characters from which have become embedded in our shared popular culture; “I'm a Lady!”, “Computer says no!” and “Bitty!” are some of the most famous catch phrases in British comedy.

David was born in 1971 in Merton, south London and grew up in Banstead, Surrey. He was educated at Collingwood Boys' School in Wallington and the independent Reigate Grammar School. He graduated from the University of Bristol in 1992 with a BA in Drama and changed his last name from Williams to Walliams after discovering there was already a David Williams in the actor's trade union Equity.

After leaving university, David's first job was writing for The Ant & Dec Show, a children's show that aired on CBBC from 1995 to 1997. His first appearance on screen was as "Lesley Luncheonmeat" on Sky1's show Games World in 1993. In 1998 he wrote and starred in Barking, a late night sketch show broadcast on Channel 4 and featuring a host of then unknown stars such as Catherine Tate, Peter Kay and Mackenzie Crook.

David Walliams and Matt Lucas finally debuted on stage together in 1995 at the Edinburgh Fringe Festival and throughout the late 1990s played minor roles in sketches such as The Club. David and Matt played grotesque caricatures of various rock musicians in the series Rock Profile and in the spoof documentary series Sir Bernard's Stately Homes. They were also stars of the Paramount Comedy Channel show Mash and Peas, and had small roles in Plunkett and Maclaine as prisoners. However, it is Little Britain for which the pair are best known as a comedy duo, and the series ran from 2003 to 2009 on the BBC and from 2008 onwards on HBO in the USA. It first aired on BBC3 before moving to the more mainstream BBC1. A successful live stage show of the series, Little Britain Live, was produced in 2006.

David Walliams is an ardent charity campaigner and fundraiser, most famously swimming the English Channel in 2006 and raising over £1 Million for Sport relief. He initially took up swimming in his youth as his preferred form of exercise, because he was overweight. He took 10 hours and 34 minutes to swim the 22-mile (35 km) stretch of sea, equivalent to 700 lengths of an Olympic-size swimming pool.

In March 2008, along with Olympic medalist James Cracknell, he swam the 12 miles (19 km) Strait of Gibraltar from Spain to Morocco for charity. He successfully completed the swim in just over 4½ hours. And then, once again for Sport Relief, in September 2011 David swam the 140 mile length of the River Thames raising hundreds of thousand of pounds for the charity.

David Walliams is an ideal and hugely popular host for corporate award ceremonies and is also available, in the format of a Q&A session, for after dinner speaking.

In 2017 David Walliams was awarded an OBE in the Queen’s Birthday Honours List for services to charity and the Arts.

Clients often ask about purchasing books for giveaways and delegate packs. Below you’ll find a selection of products by David Walliams OBE. Click the images to view on Amazon's website. For bulk orders, please speak with your Booking Agent.

How to book David Walliams OBE for your event