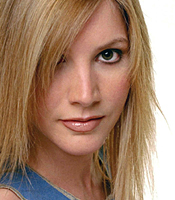 Lisa Faulkner is an accomplished Actress, Presenter and TV Chef. Making her acting debut opposite Jane March in Jean-Jaques Annaud's highly regarded The Lover, Lisa went on to star in popular TV dramas including ‘Dangerfield' 'Brookside', ‘Spooks' and 'Holby City'.

Recently Lisa starred in Jimmy McGovern's BBC TV series 'Moving On' and was a regular contributor to the Sky1 show 'Angela and Friends'. In 2010, Lisa was crowned the winner of Celebrity Masterchef and can now be seen most weeks cooking in the This Morning Kitchen on ITV.

Lisa was also on stage demonstrating her Celebrity Masterchef winning skills at the Masterchef Live Events in London and at The Good Food Show in Birmingham and Glasgow. Lisa continues to cook at the influential Friday Food Club and joined leading food writers and chefs for the opening of the Waitrose Cookery School in London.

A former frequent panelist on Channel 5's The Wright Stuff, Lisa has fronted VT's for BBC 1'S The One Show as well as presenting BBC2's long running magazine show – Something for the Weekend.

Lisa is currently presenting the super successful Heir Hunters series on BBC 1 daytime and can currently be seen on screen reprising her role as Anna Fulford in ‘The Murdoch Mysteries' - Tuesdays at 9pm on alibi. Most recently, Lisa has co-presented The Real Food Family Cook Off with Matt Dawson for Channel 5.

Clients often ask about purchasing books for giveaways and delegate packs. Below you’ll find a selection of products by Lisa Faulkner. Click the images to view on Amazon's website. For bulk orders, please speak with your Booking Agent.

How to book Lisa Faulkner for your event