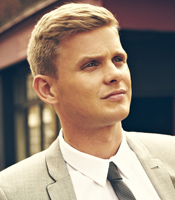 Jeff Brazier is one of the UK's most loved and in demand TV presenters who has hosted some of the biggest shows on British television.

Originally a professional footballer, signed to Leyton Orient FC Jeff Brazier had to retire after succumbing to injury problems, but he stills plays football and is often involved in charity matches.

In 2001 Jeff Brazier took part in Channel 4's reality series, Shipwrecked, in which he and fifteen other contestants had to survive on a tropical island with no creature comforts.

He then appeared in various other shows including ITV's Simply the Best, Celebrity Wife Swap, and in 2004 he won Five's reality show, The Farm.

Moving into presenting, in 2006 Jeff Brazier joined the team of ITV2's I'm a Celebrity... Get Me Out of Here! Now series. He has also presented on Channel Five's daily magazine show, OK! TV, ITV1's This Morning and as a live outside broadcast present for the X Factor Live Finals.

In 2011 Jeff participated in the sixth series of ITV's Dancing on Ice, reaching the quarter finals.

Jeff is an extremely popular personality for personal appearances and a dynamic and skilled live host and presenter.

Jeff Brazier is an extremely popular personality for personal appearances and a dynamic and skilled live host and presenter.

How to book Jeff Brazier for your event