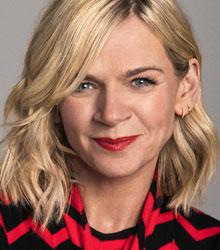 As the current and first female host of the BBC Radio 2 Breakfast Show, the UK’s most listened to radio programme - Zoe Ball needs little introduction.

The daughter of 1970s-80s Think of A Number and Playaway TV presenter, Johnny Ball, Zoe began her media career as a runner at Granada Television and researcher on BSkyB before spending two years as a researcher for quiz shows.

After presenting the much-lauded Live & Kicking on the BBC from 1997-2000, Zoe was also the first woman to front the BBC Radio 1 Breakfast Show alone, winning her a new legion of fans and not to mention a Sony Gold Award. She presented it until March 2000 when her best friend Sara Cox took over.

Zoe Ball continued her on screen partnership with Jamie Theakston for three successful series of 'The Priory' (Ginger Prods) for Channel 4 and presented the BBC series 'Class Of...'. She then presented the Saturday night BBC3 coverage of 'Strictly Dance Fever' and ITV's Specials, 'Queenmania' and 'Elvismania'.

An avid film buff, Zoe interviews all the top stars for BAFTA's Red Carpet and presents SKY's exclusive coverage of the OSCARs. Zoe can also be seen providing the nation with behind the scenes Strictly gossip on her weekday show, It Takes Two on BBC2.

Nowadays, you can regularly hear Zoe on Radio 2 every Saturday 3-6pm - whilst also providing the nation with their behind the scenes Strictly gossip on her weekday show, It Takes Two on BBC2.

How to book Zoe Ball for your event