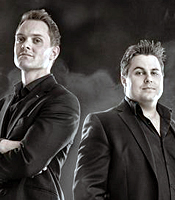 The pair met when they were 8 years old and their early childhood friendship was cemented with a common interest in all things magic. They spent their early teenage years attempting, and failing, to make Las Vegas style illusions with cardboard and tape. With little money, they were forced to innovate, creating original illusions and magic tricks. This soon caught the attention of magicians around the UK as an act to watch in the future.

In recent years the relentless development and innovation of their spectacular illusions, and live shows, have landed them spots on prime time television and the biggest stages around the UK.

Young & Strange have performed at the Edinburgh Fringe for the last 3 years, and the success of their 2013 Edinburgh show landed the duo the headline spot on the Champions Of Magic national UK touring show.

Alongside live performances in theatres around the country, they perform regularly at corporate events and product launches. They have worked for many organisations, from small independent businesses, to the biggest names in industry. Clients include Nokia, Audi, Nationwide, HSBC and Microsoft.

Young & Strange are both members of The Magic Circle and were recently promoted to become Associate Members of The Inner Magic Circle. This is the highest qualification achievable through performance examination.

The Young & Strange illusion show is highly versatile and can easily adapt to different types of events and venues, whether in the UK or around the world.

Young & Strange have over 2 hours of impressive, high impact material featuring everything from intimate sleight of hand through to grand scale stage illusions. The very best comedy and magic effects, suiting your event, will be selected to run to your timescale and have the desired impact. They make every event truly memorable and exciting for everyone in the audience.

After Dinner Cabaret Shows
Young & Strange can offer a spectacular after dinner show which will have your guests on the edge of their seats and astonished by state-of-the-art illusions, happening live just a few feet away. The show is completely versatile and can adapt from the largest conference halls through to small hotel function rooms.

Corporate Events
Whether you’re entertaining blue chip clients or celebrating employees achievements, Young & Strange offer a spectacular and memorable live illusion show that all your guests will remember. ‘Magically’ producing the CEO or special guest during the event is a wonderful and unique touch which will grab everyone’s attention.

Trade Shows
The trade show floor is a fiercely competitive place and grabbing your potential customer’s attention can be difficult. Young & Strange will ensure no one walks past your stand without understanding exactly what it is your company has to offer. Spectacular stage illusions performed every 20 – 30 minutes will stop the room and bring attention to your stand. Close up magic can be performed in between larger performances. This will ensure there is a entertaining thread running throughout the day.

We recently used Young and Strange to close our annual awards ceremony at our Head Offices. They were professional in every respect and the act made the evening an overwhelming success. The magic was truly inexplicable and the whole show was very funny and entertaining (something we had not expected from a large scale magic act). Wholeheartedly recommended.

Young and Strange have never failed to deliver. The act is slick, fresh and well suited for a corporate after dinner show.

How to book Young & Strange for your event