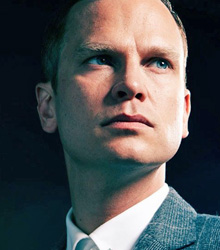 Internationally renowned magician, comedian and actor, Ali Cook has been making waves across all three disciplines in recent years. He has written and starred in seven British television series including Penn & Teller: Fool Us, Dirty Tricks and Monkey Magic.

Ali’s career started on the Channel 5 sketch series, The Jerry@Trick show with alternative comedians Jerry Sadowitz, Phil Nichol and Boothby Graffoe. The head of comedy at Channel 5 spotted him during tapings which lead to Ali writing and starring in seven of his own comedy and magic magic series for Channel 4, Channel 5, and Sky1. Ali’s Channel 4 Series Dirty Tricks was nominated for a British Comedy Award and The Golden Rose of Montreux.

Ali Cook starred in the first Penn & Teller: Fool Us series hosted by Jonathan Ross, and then in 2011 he performed his Houdini-style water Torture Escape on The Slammer (CBBC). He has also starred in the prestigious France 2 series Le Plus Grand Cabaret du monde.

Recent acting credits include: Mr Selfridge, the role of the villainous Patrick in multiple episodes of Emmerdale in 2016, The ABC Murders and playing Sgt. Paul McMellon in the feature film Kajaki, which was nominated for a BAFTA in 2015.

His second Edinburgh Fringe Festival show, Pieces of Strange (2008), was in the top two percent of best-reviewed shows according to The British Comedy Guide. 2011 saw Ali return to perform his third sell-out, and critically acclaimed Edinburgh show, Principles of Deception.

How to book Ali Cook for your event