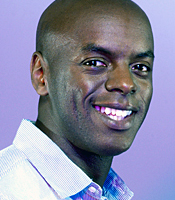 Trevor Nelson's first job was in a shoe shop, but his love of music meant a part time role as a DJ. He gained day time work at a record importer in 1985, and widened his DJ experience putting on 'warehouse parties' at the weekends.

Trevor Nelson then worked in A&R for record labels Cooltempo and EMI, promoting artistes such as D'Angelo, Arrested Development, Mica Paris, Gang Starr and Lynden David Hall. DJing the graveyard shift on then pirate station Kiss FM in London led to a daytime slot and a directorship once the radio station went legal. Continuing his heavy DJ schedule he made his name at the infamous Soul II Soul Sunday night jam at the Africa Centre. The working friendship he built up with front man Jazzy B culminated in them setting up the second Soul II Soul shop in London.

After 10 years with Kiss FM; 1996 saw him move over to Radio 1 to present Rhythm Nation. Within a year he began a second show on Saturday afternoons. Trevor's won the best DJ Mobo twice over - and has co-hosted the ceremony twice, with Kelis and the late Lisa 'Left Eye' Lopes.

Trevor presented MTV's black music shows The Lick and The Lick Chart before getting his own music shows on BBC television - Trevor Nelson's Urban Choice and The Lowdown. He also appeared as a judge on the 2006 show Just the Two of Us, and again in 2007.

Since September 12, 2009 Trevor Nelson has co-presented NFL UK, a weekly American Football highlights magazine show on Five (TV channel) with Natalie Pinkham. Trevor has worked on numerous BBC shows that include: "Holiday:you call the shots" / "Trevor Nelson's Urban Choice" / The Players club" series and more recently he presented the coverage of the FIFA World Cup concert in South Africa for BBC2 in 2010. Nelson regularly appears as a pundit on programmes where celebrities recall their detailed memories of popular culture.

He released compilation albums Pure Grooves and INCredible Sound Of Trevor Nelson and hosts a stage at London 's Notting Hill Carnival with Radio 1. Trevor continues to DJ across the UK and around the world and present events like the Prince's Trust Urban Music Festival and MTV Europe Music Awards.

Trevor Nelson's a champion of RnB music in the UK, and his increasing profile has made him a respected figure in the music industry across the world.

How to book Trevor Nelson MBE for your event