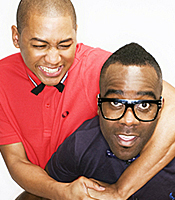 In 2007 Kiss FM signed up Rickie Haywood-Williams and Melvin Odoom as their new hosts for The Breakfast Show and in 2009, they were joined by co-host Charlie Hedges. That year they went on to win Silver at the Sony Radio Awards within the category of “Breakfast Show Award”, and the show was consistently known as the UK’s biggest commercial breakfast show with 2 million listeners per week.

In 2010, Rickie and Melvin presented the backstage online content for Sky1‘s Must Be the Music. Melvin has presented two series of intros for Channel 4, interviewing all the new up and coming bands for 2010 and hosted an MTV Leona Lewis special and presented BBC Blast for BBC Two. Since 2015, Rickie and Melvin co-hosted ITV2‘s red carpet show at the BRIT Awards, alongside Laura Whitmore.

From April 2019 Rickie, Melvin and Charlie Hedges moved over to BBC Radio 1 to present late nights from 9-11pm Monday-Thursday.

In 2016, it was announced that Melvin would take part in the fourteenth series of Strictly Come Dancing. He was partnered with Janette Manrara. The couple were the first to leave the competition having had the fewest public votes. But in an ironic twist of events Melvin and Janette went on to win the Strictly Come Dancing Christmas special. Melvin has hosted the Channel 4 programme Lego Masters, where teams battle to build the best Lego creations.

Rickie presented MTV News bringing viewers up to speed on the hottest music news, the latest crazes and celebrity gossip. He has presented news from various red carpets, including the lavish MTV Awards and London’s biggest film premieres and is a fantastic events host and perfect to host awards evenings and any other similar events.

Rickie filmed a BBC Three documentary, My Weapon is My Dog, which explored in depth the hip-hop and peer-pressure culture that has led to a growth in aggressive dogs and examining why many young men want to be feared.

How to book Rickie & Melvin for your event