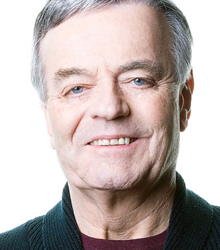 Born in Guildford, Surrey Tony Blackburn was educated at Millfield Public School in Somerset, and Bournemouth College. The son of a doctor in Lilliput near Poole, Dorset, he made his first public appearance with the Ian Ralfini Dance Orchestra at the Bournemouth Pavilion while at College, and later appeared with various bands in hotels.

Today Tony presents a network soul show for Jazz FM and The Real Radio group on Saturdays 5 - 8 pm. As of 31st March Tony will be presenting the breakfast show for The Classic Gold Network, which transmits across 18 stations. Tony is a legend of the airwaves and has become a household name through his DJ-ing, TV Shows, and he inspired the cult of the radio DJ.

Tony has thirty-six awards including, in 1989, the 'Gold Award for Outstanding Contribution to Radio'. He was also awarded the 'Best Breakfast Show' (Contemporary Music) by Sony Radio Awards in 1993 and "The Radio Academy Music and Media Award" for outstanding contribution to Music and Radio in 1997.

Tony also co-presented ITV's prime-time show, Animals Do the Funniest Things, which attracted over 7 million viewers on its last showing. Tony has made numerous other television appearances over the years, including the hosting of his own show 'Time For Blackburn' in 1969. He is well remembered for compering BBC's world famous "Top Of The Pops" from the late 1960's to throughout the 1970's. He continues to make regular guest appearances on a wide range of television shows. Tony's most recent television appearance in 'I'm a Celebrity ... Get me Out of Here!' was a huge success - he was crowned King of the Jungle.

Whether it’s for a corporate function or a private party, Tony Blackburn is still a huge attraction on the DJ circuit. He continues to make many personal appearances with his trademark 70s and 80s show, including his annual trek to one of Ibiza's top clubs - proving that he's still the original.

Tony’s performance was absolutely amazing and everybody loved it. They are all talking about it, telling their friends how good he was. He made a perfect choice of songs for the event. We were all thrilled to meet Tony and what a wonderful man he is, and he’s still got those good looks and charm too. I don’t know where he gets the energy from to do all that dancing and I hope his neck is OK after the medallion swinging. He spent plenty of time after the show with the audience and they couldn’t believe they were with such a star.

How to book Tony Blackburn for your event