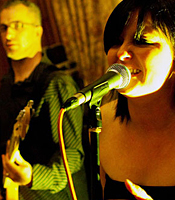 Book The Love Junkies
add to shortlist
About

The Love Junkies are one of the UK's premier function bands. Over the past eight years, the band have firmly cemented their reputation and established themselves as one of the hardest working party bands, specialising in weddings, corporate work and parties.

The band stick to the classics and concentrate on playing Motown, Disco, Funk and Soul from the sixties to the noughties, priding themselves on authentically replicating the hits the way they are meant to sound.

Fronted by Rox Clayton-Scott, one of the finest singing talents in the country, the band have proved their popularity time and time again by cutting out the gimmicks, getting back to the basics of playing classic songs with soul and making sure that the audience stays firmly routed on the dance floor.

Rox Clayton-Scott – Vocals
Rox has been working as a professional singer for over 10 years and is a highly respected and sort after vocalist. She regularly records jingles for; "The Chris Moyles Breakfast Show" (Radio 1), Virgin, Capital FM, Radio City 96.7, Heart 106.2, Invicta, KMFM plus she has sung on adverts for many high profile companies including SONY, SKY and Ford. Her vocals have also featured on a number of dance tracks some of which appear on albums released by The Ministry of Sound.

Dave Patrick – Guitar / Vocals
Dave has been playing in professional function bands for at least the last fifteen years, most notably Speakeasy. He has played and worked with a number of well known acts including Toyah, Wishbone Ash and Shaun Williamson, as well as recording session vocals for a number of professional shows.

Chris Wong – Guitar / Bass / Bv's
A professional for over 20 years, he is the MD and lead guitarist for Toyah. He has previously worked with Natalie Imbruglia, Martine McCutcheon, Sheila Ferguson and Al Martino. He is currently involved in “The Humans” project with Bill Reiflin (REM) and Toyah. He also works with Don Mescall (SONY BMG Music group) who penned the hit 'All Over Again' for Ronan Keating and Kate Rusby.

Andy Doble – Keyboards
Andy is also the keyboard player in Toyah's current line up. He has worked with many well known acts throughout the years, including Edwin Starr, George Williams (the Tymes,) George Clinton (Parliament, Funkadelic etc.) to name but a few...

The Love Junkies were formed in 2000 when singer and drummer team, Rox Clayton Scott and Marcus Bishop partnered up with Silent Prayers guitarist Dave Patrick and Speakeasy bass player, Nathan Dawe. Combined with a small brass section the band went on to play a number of successful function gigs.

At that time Chris Wong joined the band on guitar to fulfil the club gigs as a trio. As the function gigs came piling in, Dave joined up for the residency, Chris moved to Bass guitar and the established classic 4 piece line-up of the band was set. 2002 was the year it all took off. Since then the band have been playing constantly, with gigs more or less every weekend, moreso during the summer months.

The mission was always the strong and overwhelming desire to get out there and play good classic music, soulfully, authentically and without the theatricals (i.e. no makeup, wigs, hairy chests, medallions and bs).

All very well organised by Function Junction and the Love Junkies were brilliant! They fitted perfectly into the style of the day and were very adaptable since we were running late and they altered their schedule accordingly.

Just wanted to say a huge thanks for the FANTASTIC performance you all gave at our daughter's wedding last Saturday. It was brilliant, the lead vocalist's voice was great and everybody commented how superb you were. The whole day was wonderful and once again, thank you for the contribution in making the evening such a success.

We just wanted to say thank you very much to you all for a great evening of entertainment at our wedding. We had so many comments to say how fantastic you were. The evening really was enjoyed by everyone.

An excellent band who we would highly recommend, many guests commented on their fantastic performance – it was rocking!

The Love Junkies far exceeded our expectations, we are absolutely delighted with the music and atmosphere they created. They really got the crowd going, and played tracks that perfectly complimented the mood! Such talented musicians - really accommodating and friendly. we had so many compliments about the band - we have spread the word! Thank you for such a professional service. watching and listening to the band on the video brings a huge smile to our faces! thank you very much for adding so much to our perfect day.

Dear Love Junkies! Thank you for the fab music you provided at our wedding reception. We want to thank you for your part in helping our day run smoothly. Everyone had a fantastic time.

The Love Junkies are brilliant Their performance was the perfect conclusion to an incredible day. We've had endless positive feed back from friends and relatives ever since. Another band in the same hotel also enquired who they were and were very complimentary about them. Thank you very much.

We absolutely love The Love Junkies she had an outstanding voice with real ooommff!!

How to book The Love Junkies for your event