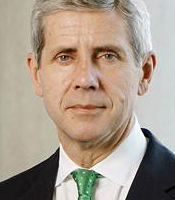 Born in 1949 in Yorkshire, Lord Stuart Rose has become known as one of the shrewdest businessmen in Britain and has spent a lifetime working as a successful manager and businessman within the retail sector.

With a talent for revamping failing brands, Stuart began his retail career as a management trainee at Marks & Spencer in 1972. Over the following 17 years he quickly climbed the corporate ladder, holding a number of positions throughout the organisation, including Commercial Director of Marks & Spencer Europe.

After leaving Marks & Spencer in 1989, Stuart Rose joined the Burton Group, and following the group de-merger he joined Argos in 1997 as Chief Executive - successfully defeating a hostile take-over bid. The group was later sold at a much higher price thanks to Lord Rose's intervention. After completing a successful merger with Iceland as head of Bookers plc, Stuart then joined the Arcadia Group in 2000, once again taking on a struggling and heavily indebted company, he turned the business around and presided over its sale, reportedly for £855 million, only two years later.

And so Stuart Rose returned to Marks & Spencer, this time as Executive Chairman. On arriving, he was tasked with the challenge of revitalising the M&S brand and fought off a high-profile take-over bid from Sir Philip Green. His energetic and charismatic leadership turned around declining performance and restored M&S in the affections of the British public, enabling it to weather the recent recession, with profits again on the rise. Lord Stuart Rose was named 'businessman of The Year in 2006'.

Along with his noted business acumen, Stuart Rose has brought another kind of vision to M&S. The 'Plan A Initiative' commits the company to working with customers and suppliers to combat climate change, reduce waste, use sustainable raw materials and trade ethically. Its vision and implementation - from reducing packaging to developing standards for sustainable farming - has set a gold standard for ethical, sustainable business.

In 2008 he was knighted not only for services to the retail industry, but also British business and corporate social responsibility. Stuart Rose is currently Chairman of the internet grocery retailer Ocado along with a number of other non-executive roles.

How to book Lord Stuart Rose for your event