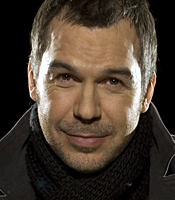 Steve Brookstein first came to the public's attention in 2004 as a vocalist who exploded onto our TV screens as the first ever winner of The X Factor. He remained for 5 years (until 2009) the performer with the most amount of votes, with over 6 million across the UK.

Following this spectacular success, Steve Brookstein went straight to the top spot with his debut single 'Against All Odds' and in June 2005 his debut album also hit number one.

Steve enjoyed an early life filled with sporting activities consisting mainly of football and badminton. Steve only found his true vocation aged 20 when a chance meeting at a karaoke bar inspired Steve to embark on a career in singing. Within 2 years he was singing in bars performing classic soul numbers from such legends as Luther Vandross, Al Green, George Benson and Marvin Gaye. But it wasn't until 1996 when Steve had his first taste of the record business, when he signed to MCA Records with a cover of 'Only You' a Teddy Pendergrass stateside hit. Despite being the Judge Jules Radio One Record of the Week the song was never released and the record label closed down weeks later.

In 1998 Steve Brookstein decided to focus on writing and producing for younger singers and teamed up with record producer Livingstone Brown. Before too long the pair had signed two artists to major record labels, Virgin in the UK and the Sony in the USA. He then signed a publishing deal with EMI in New York as a songwriter. Steve wrote and produced two albums but just as with his own deal, both artists were dropped before the albums were ever released.

In 2003 Steve was spotted singing in a bar and was asked to support Dionne Warwick in concert. The night was a success and as a result he was asked to support Lionel Richie at Wembley. However, Steve had to decline the offer as he had just entered a brand new talent show called X-Factor and had reached the live finals.

So in December 2004, Steve Brookstein became the first ever winner of the now-hit TV show and the soul singer from South London gained fans from Ricky Gervais to Richard Curtis. Despite the commercial success of his single and album, Steve was disappointed that the record label would not entertain the recording of original songs so rather than do another album of covers Steve requested to leave.

Steve Brookstein has since written and recorded an album with his wife Eileen Hunter, an accomplished jazz singer.

Steve is available for either an acoustic show, a duo show with jazz musician and writer Eileen Hunter or a PA with backing tracks.

Steve has his Soul band The Terrells, which is made up of World Class players who have performed all around the globe with such artists as Jessie J, Sir Tom Jones, Lady Gaga, Gregory Porter, Massive Attack, West Life, Leona Lewis, Maxi Priest, Gloria Gaynor, The Water Boys, to name a few.
The Terrells are also available for corporate events, weddings, public and private shows.

Steve, totally mindblowing...any big name comparisons, he is right up there with them.

I have been waiting to hear a voice like Steve's for some time to be reassured there are singers around who possess a real voice as well as a commanding presence. In other words someone who is the real deal.

Clients often ask about purchasing books for giveaways and delegate packs. Below you’ll find a selection of products by Steve Brookstein. Click the images to view on Amazon's website. For bulk orders, please speak with your Booking Agent.

How to book Steve Brookstein for your event