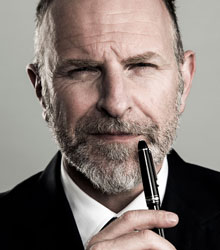 Simon Evans is one of the UK’s most respected and established comedians. He is a regular on TV and radio and particularly popular on the corporate and after dinner circuit.

His TV credits include BBC One’s Live at the Apollo and Michael McIntyre’s Roadshow, BBC Two’s Mock the Week and a regular on Channel 4’s Stand Up for the Week. On BBC Radio 4, Simon Evans Goes to Market, which was re-commissioned for a fifth series, had audiences delighted in his witty and insightful take on the unpromising comic territory of commodities, trading and wealth.

Other BBC Radio 4 appearances include The News Quiz, The Unbelievable Truth and Armando Iannucci’s Charm Offensive. He is also the only comedian to have appeared on both University Challenge – the Professionals, and Celebrity Mastermind (which he won – specialist subject Sir Ernest Shackleton). Simon has also appeared on Question Time.

Simon’s live tour shows such as Leashed and Genius have sold out theatres around the country and garnered superlative reviews from national and comedy press. Dominic Maxwell described him as ‘demonically dry’, William Cook as ‘sublime’, and Chortle as ‘an evil delight’.

Simon Evans is a popular fixture on the corporate circuit, with his ability to perform an entirely clean set without compromising on the laughs (but also to ‘strengthen’ the language when appropriate, without descending into vulgarity) and his relative maturity and reference points have made him a great hit with audiences.

He is also – to great benefit at awards functions etc – blessed with the ability to deliver from autocue with natural ease, panache and when necessary, a good turn of pace.

Simon Went down very well and was very obliging even though we were running a bit behind. One of our members said he was laughing so much that he actually cried!

A masterclass in socio-political comedy… The Show is called Genius. It comes very close.

How to book Simon Evans for your event