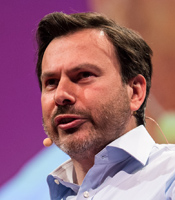 Simon Anholt is one of the world’s leading thinkers and practitioners on ultra-widescale human engagement. His work over the last thirty years has focused on creating and leading new fields that measure, understand and influence attitudes, culture and activity at the global scale.

He is regarded as the leading authority on managing national identity and reputation.

His first company was an international strategy firm which he founded in London in 1989, ran until its sale in 2002, and is still the world leader in its sector today. Here, he developed Culture Mapping, a revolutionary approach to international marketing strategy based on anthropological analysis of global consumer values and attitudes, for more than 100 companies including Nike, Timberland, Emirates, Benetton, HSBC, DreamWorks, IBM, Unilever, Shell, Levi’s, BBC Worldwide, Microsoft, Coca-Cola, Vodafone, Sony, DuPont and Samsung.

In 1996, Anholt created the field of Nation Brands and City Brands. As the leading authority in this field, he has worked with the Heads of State and Heads of Government, and the civil society and business leaders of more than 50 nations, as well as numerous cities and regions, to develop and implement strategies for enhanced economic, political and cultural engagement with other countries and cities.

As the leading figure in the measurement of national reputation, Simon Anholt is also the founder and publisher of one of the largest annual social surveys ever conducted, the Anholt-GfK Roper Nation Brands IndexSM. Since 2005, together with the Anholt-GfK Roper City Brands IndexSM, this study has tracked and analysed the perceptions of a sample representing nearly 70% of the world’s population and has a cumulative database of nearly one billion data points.

In 2014, he started the Good Country movement, and the Good Country Index: the world’s first study of how much each country on earth contributes to the rest of humanity and to the planet. The Good Country was launched in June during Anholt’s TEDtalk and is currently rated by viewers as the most inspiring TEDtalk of all time. This started a global discussion about how countries, cities and companies and their leaders can balance their duty to their own people with their responsibility to the wider world, and has already established huge following and momentum for the movement, across 162 countries.

A trilingual UK national, Professor Anholt has a Master’s Degree from the University of Oxford and is a Parliamentarian of the European Cultural Parliament. He was awarded the Nobels Colloquia Prize for Economics by a jury of 25 Nobel Economists in Trieste in 2009 and the Prix d'Excellence du Forum Multiculturel pour un Développement Durable (Award for Excellence in Sustainable Development), at the 7th Multicultural Forum at the Palais de la Découverte, Paris, in 2010.

Brand as if reality mattered.
Perceptions are so important in the modern world - for corporations, nations, even people – it’s not surprising that image enhancement has become a huge industry. Yet because perceptions live in the mind of the consumer, not in the office of the brand owner, they are almost impossible to manipulate, and most of the money spent on branding every year is utterly wasted.

Yet a good reputation can be earned, even if it can’t be constructed – and the research proves that the quickest way of earning and retaining a good reputation is by doing things for people that make them feel glad you exist.

Big Data and the Fate of Nations.
The Anholt-GfK Roper Nation Brands Index, one of the biggest social surveys ever conducted, has since 2005 collected more than 200 billion data points from a sample representing nearly 70% of the world’s population.

This unique resource reveals extraordinary findings about why people admire certain nations and cities more than others, and what this tells us about the global balance of power, the future of capitalism, the way that global culture evolves, how the world is actually becoming slightly ‘gooder’ every year. It also reveals some startling insights into the best ways of tackling the huge challenges that face humanity today.

This is good news in an age where companies and countries need to work more closely than ever before to address global challenges: it turns out that being more collaborative actually makes organisations more competitive. Simon Anholt shares some unique insights into the real mechanisms behind the principle that doing well and doing good are now the same thing.

Education: our inoculation for a better future.
Simon Anholt’s Good Country is a global educational movement that aims to train ordinary people around the world to make their countries, cities and companies focus as much on co-operation and collaboration as on competition.

Using the latest techniques of mass online learning, his plan is literally to inoculate future generations against the problems that we and our ancestors have produced. Anholt will show how every business and institution in the educational field can participate in this inspiring project and benefit from its involvement.

Simon Anholt is one of the mostinfluential and respected advisorsto corporations and governmentsseeking to enhance their competitivenessin the global marketplace.

Simon Anholt's presentation exceeded all our expectations and received a standing ovation. Many delegates told us how exciting and informative they found Professor Anholt, with positive comments on his style: entirely unscripted and very engaging.

It is a rare privilege to encounter an expert who presents truly world-class expertise in such an engaging, effective and memorable way.

Simon Anholt is relaxed and inspiring at the same time. I wish to express my great satisfaction with his outstanding contribution to our progress.

I know the President [of Sierra Leone] was especially impressed and grateful for your insights. Thank you very much for offering your own time and unique expertise and support.

Simon Anholt has definitely placed the 'branding' conversation on a much higher plane than before for the business chiefs who attended the summit.

Simon Anholt has given us a globally informed perspective and was highly refreshing and inspirational.

Simon Anholt's speech was both bold and surprising, while also logical and compelling – just what our delegates needed. It was a rare privilege and pleasure and I would recommend him to anyone committed to the long term interests and welfare of their company or country.

Ojars Kalnins, Former Ambassador to US.

Clients often ask about purchasing books for giveaways and delegate packs. Below you’ll find a selection of products by Simon Anholt. Click the images to view on Amazon's website. For bulk orders, please speak with your Booking Agent.

How to book Simon Anholt for your event