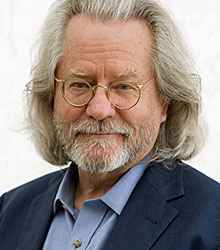 Professor Anthony Grayling is an acclaimed writer, philosopher and one of the most influential thinkers of our time. He is Master of New College of the Humanities, and a Supernumerary Fellow of St Anne's College, Oxford. Until 2011 he was Professor of Philosophy at Birkbeck College, University of London.

Professor Grayling has written and edited over thirty books on philosophy and other subjects; among his most recent are The Good Book, Ideas That Matter, Liberty in the Age of Terror and To Set Prometheus Free. For several years he wrote the "Last Word" column for the Guardian newspaper and a column for the Times. In June 2019 Penguin Viking published his latest book, The History of Philosophy.

He is a frequent contributor to the Literary Review, Observer, Independent on Sunday, Times Literary Supplement, Index on Censorship and New Statesman, and is an equally frequent broadcaster on BBC Radios 4, 3 and the World Service. He writes the "Thinking Read" column for the Barnes and Noble Review in New York, is the Editor of Online Review London, and a Contributing Editor of Prospect magazine.

In addition Professor AC Grayling sits on the editorial boards of several academic journals, and for nearly ten years was the Honorary Secretary of the principal British philosophical association, the Aristotelian Society. He is a past chairman of June Fourth, a human rights group concerned with China, and is a representative to the UN Human Rights Council for the International Humanist and Ethical Union.

Anthony Grayling was a Fellow of the World Economic Forum for several years, and a member of its C-100 group on relations between the West and the Islamic world. He has served as a Trustee of the London Library and a board member of the Society of Authors.

Professor AC Grayling is one of the most influential thought leaders and creative thinkers of our time, and is a highly in-demand inspirational speaker for corporate audiences.

Anthony offers his audiences a fascinating perspective on corporate ethics, the relationship between business and society, the purpose of wealth creation and what a worthwhile life looks like.

He also talks about the social, ethical, political and economic impact of advances in biomedicine, AI and robotics, and the emergence of an evolutionary diverse species of humans.

Clients often ask about purchasing books for giveaways and delegate packs. Below you’ll find a selection of products by Professor AC Grayling CBE. Click the images to view on Amazon's website. For bulk orders, please speak with your Booking Agent.

How to book Professor AC Grayling CBE for your event