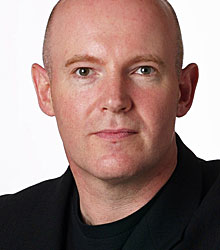 Julian Treasure is a five-time TED speaker and author of the books Sound Business and How to be Heard. Since 2003, he has been exploring and communicating about the power of sound, both for organisations (audio branding) and for each of us as individuals (speaking and listening skills).

Listening is the doorway to understanding; we teach our children how to read and write, but not how to speak and listen. Listening is untaught and usually unpractised. Our amazing human voice is marginalised as we communicate more and more through text, not spoken word.

Julian’s five TED talks have been watched more than 100 million times. His latest, How to Speak So That People Want To Listen, is in the top 10 TED talks of all time. Julian is regularly featured in the world’s media, including TIME Magazine, The Times, The Economist and the BBC.

Julian Treasure’s love of sound stems from his early experience as a musician. He was a drummer for British band The Transmitters, amongst many others, and played on their second Peel Session in 1981. He then spent 30 years working in advertising and publishing. He founded, grew and sold contract magazine publishing agency TPD.

He is author of the books “How to be Heard”, “Sound Business” and “How to Speak So That People Want To Listen”.

Nowadays, Julian splits his time between London and Orkney, where he lives with his fiancee and youngest daughter.

Julian Treasure delivers engaging keynote speeches and motivational workshops on the crucial but undervalued skills of powerful speaking and conscious listening, and on the power of sound for business benefit.

His content inspires audiences on many levels, enhancing communication skills, personal effectiveness, well-being and relationships, both at work and at home.

How to speak so that people want to listen
Have you ever felt like you're talking, but nobody is listening?

Julian Treasure reveals the secrets of powerful speaking; developing simple habits that will transform not just your communication skills but also the quality of your relationships and your impact in the world — from designing great content to vocal exercises and tips on building rapport.

His talks enhance business success, particularly for those in sales or leadership roles. His presenting abilities and innovative use of sound make his talks visceral and potent experiences that are always highly rated by delegates.

Learn the secrets of powerful speaking, including how to speak with empathy; design great content; convey more authenticity; connect with your audience; truly express yourself; gain confidence and inspire others; build rapport and articulate your ideas to get them readily accepted.

Conscious listening in a fast-paced world
We are losing our listening. As a result, companies are losing billions of dollars through poor communication. Julian teaches practical ways to retune your ears (and your organisation’s) and improve everything from customer experience to personal relationships.

The four ways sound affects us / sound health
Julian transforms the audience's relationship with sound by demonstrating how it affects everything from our heart-rate to our thinking and behaviour. He explains the importance of conscious listening and reveals how we can use the right sound to lead healthier, happier lives.

In addition to keynote speeches, Julian can also carry out interactive training workshops for your company or organisation.

Julian Treasure made a great keynote at WORKTECH15 London and was one of our highest rated speakers with wonderful content and energy. We’d love to include him in our future programmes.

Julian Treasure was the keynote speaker during our annual Client Conference. Without exception, his presentation was voted as the best of the event. Julian has a wonderful ability to communicate and connect with his audience, and his hour passed all too quickly.

Julian’s session was spot on, presenting new insights into sound effects and making us aware of the importance of sound in our daily lives and as producers of content. Feedback from our delegates has been unanimously positive. His session on our web-tv is the most sought after from this year’s conference.

To quote one of the attendees, your presentation was “outstanding!”

Julian’s talk was a standout for the distinguished audience at our 20th anniversary event. The subject matter was literally ear-opening, and his demonstrations with sound were both enjoyable and enlightening, helping everybody to gain a whole new perspective on the sheer influence of sound.

The Global Retail Marketing Association Annual Forum seeks out the most visionary thought leaders to present at our annual forum, including those who will inspire and inform our audience of senior retail marketing professionals to new levels of innovative thinking. Julian Treasure did just that. He gave a fascinating and engaging talk about the impact of sound on human behaviour; furthermore, he shared specific strategies and techniques that marketers could utilise with sound to influence customer purchasing and behaviour. As a result, these ideas are now being implemented in new retail business models.

On behalf of the entire agency, I want to thank you for the wonderful talk you gave us this week on the power of sound design. People around the office are still talking about how much they enjoyed your presentation.

Julian’s keynote within our annual Panasonic Convention, which we organise for more than 1,500 editors and dealers, was very well received by all guests who attended his presentation. For me, his presentation was not only an inspiration business-wise, but it was also a good mixture of information – conveyed in a lively way – and provided great learning for everyday life. His subject of sound is universal and relevant for everyone, and I would recommend him as keynote speaker for other opportunities within Panasonic and externally.

Clients often ask about purchasing books for giveaways and delegate packs. Below you’ll find a selection of products by Julian Treasure. Click the images to view on Amazon's website. For bulk orders, please speak with your Booking Agent.

How to book Julian Treasure for your event