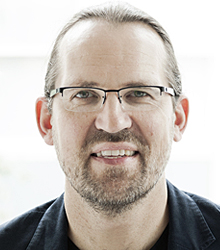 Dave Coplin is passionate about helping organisations and individuals to see the full potential that technology offers of a modern, digital society. He focuses not on the technology itself, but on the humans who use it.

Dave has a tell-it-as-he-sees-it style and a light-hearted approach. He enthuses and entertains his audiences and helps them to think differently and creatively. His mission is to make people reconsider their relationship with technology and how it can help them work smarter, not harder.

With over 25 years in the technology industry and through his day job as a technology evangelist for Microsoft, Dave is at the forefront of conversations around how individuals and organisations can benefit from the transformational potential that technology offers.

Bringing some new and exciting thinking to the world of work, Dave’s books Business Reimagined and The Rise of the Humans discuss the need to rethink how we use technology to make it work for us, not against us. The books sold well over 12,500 copies and Dave continues to write.

The Rise of the Humans (2014) shines a light on a cultural phenomenon threatening to overwhelm us – the deluge of digital information which surrounds us in work and in life. Dave argues that the sheer volume of information often prevents us from ever going deep into subjects, and constrains us from getting the much-needed headspace to think. He claims this deluge often leads us to snack on data in a way that’s unhealthy for our minds, working styles and, most importantly, our lives.

Dave’s work as a published thought leader has allowed him to start a new conversation with audiences that resonates broadly at all levels within organisations and individuals about the changing nature of work which requires even greater levels of flexibility, collaboration, creativity and innovation. With a loyal audience on social media (c5,000 twitter followers, Klout Score = 60), Dave is a prominent and regular voice at leading industry events and platforms including the RSA, WorkTech, and Cloud World Forum.

His RSA Animate video on the need to re-imagine work has generated over 800,000 YouTube hits to date. His point of view resonates widely.

Dave is an authority in the industry, on a broad range of topics and a regular contributor in UK and Pan-EMEA media including the BBC, The Telegraph and The Guardian on topics from the future of education, privacy and on-line safety, right through to the Big Data rock stars and the impact of Machine Learning.

Dave Coplin has a tell-it-as-he-sees-it style and a light-hearted approach, which his audiences enjoy as he helps them think differently. This results in him being recognised as one of the most influential people in the digital industry.

Dave talks about lots of things – fascinating, intelligent, eloquent, thought-provoking. He covers topics across the technology industry asking how technology can work to help your business as well as you as an individual, the intersection of modern society and technology, making people reconsider their relationship with technology and how it can make you work smarter, not harder.

Dave Coplin tackles these issues in a light hearted way confirming himself as the friendly, beardy, pony-tailed technology alchemist.

Excellent! Dave Coplin was a brilliant and inspired choice for our audience. Feedback has been great. We'd certainly recommend Dave.

Dave Coplin delivered an inspiring and engaging keynote at our PPMA National Conference attended by over 300 Chief Executives, senior directors, managers and guests from across the UK and North America. From the start of the keynote until the end, Dave created an interactive environment that kept the delegates engaged throughout, with his informative and enthusiastic delivery. Feedback from delegates has been amazing and I've had many comments from many delegates about how much they enjoyed Dave's session…. it was funny, enlightening, thought-provoking, entertaining and educational. I look forward to working with Dave Coplin more in the future, and to seeing him present at another Conference soon.

Thank you so much Dave for speaking at our Conference last week. In our survey of all attendees, I am delighted to say that your presentation scored the highest. We hope to find an opportunity to invite you back in the future

Dave Coplin’s talk was amazing. Not only did the content fit our “Science of Customer” theme perfectly, but his energy and charisma onstage is second to none. We’ve seen lots of good speakers. And Dave is one of the very best. Please convey our gratitude to Dave for a great closing keynote

Clients often ask about purchasing books for giveaways and delegate packs. Below you’ll find a selection of products by Dave Coplin. Click the images to view on Amazon's website. For bulk orders, please speak with your Booking Agent.

How to book Dave Coplin for your event