Electric violinist - a fusion of classical crossover and instrumental pop 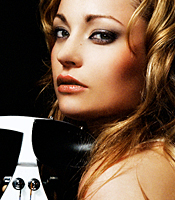 Electric violinist Sarah Tuke is the current sensation sweeping the UK instrumental music scene. Having toured with Take That on the "Beautiful World" tour in autumn 2007, Sarah spent 2008 developing her unique solo act – a virtuosic and varied show of the highest calibre.

The act is a fusion of classical crossover and instrumental pop – a performance which moves between hard hitting baroque remixes to orchestral arrangements from West Side Story.

Sarah's career has taken off at a blistering rate. 2008 featured a performance with Mark Ronson at the BRITS, classical work with Josh Groban & Il Divo, and several live shows guesting with Mika, Lemar and James Morrison. Sarah also features on the Brand New Heavies and Jocelyn Brown's albums.

As a classically trained violinist, Sarah holds a First Class Honours degree from London's Royal College of Music where she studied for four years, during which time she toured with Will Young and Simply Red, and was invited to perform for The Queen's Jubilee Celebrations at Buckingham Palace.

Sarah's live show can be performed as an entirely solo act, or with a live band and dancers.

Sarah is a natural performer - she looks great, she plays with energy and elegance, she's phenomenal

Rob Stewart (on her solo performance with him on 'Parkinson')

How to book Sarah Tuke for your event