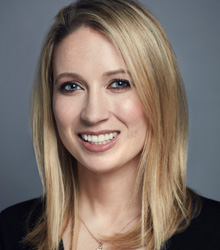 Sarah Cruddas is a TV host, author, adventurer and global thought leader in the growing commercial space sector. She has an academic background in astrophysics and is on the board of directors at Space for Humanity a US non-profit aimed at democratising access to space.

On television, Sarah is the host of the US Prime Time series Contact on Discovery and Science Channel. The show is also broadcast in the UK on Discovery UK and globally on Discovery International.

In the US she has also appeared on various other documentaries including Return to the Moon (2019), and Elon Musk: The Real Life Iron Man (2018) alongside Elon Musk, Richard Branson and Amber Heard.

In the UK she is a regular face on Sky, BBC, Good Morning Britain, ITV news, Channel 5 News, Channel 4 News and BBC News. And has appeared on various shows include Coast, Sunday Morning Live and Derren Brown.

In July 2019, to celebrate the 50th anniversary of the Moon Landings, Sarah hosted a video alongside celebrities such as Jarred Leto and Pharrell, which was broadcast in Times Square in New York. As well as at the Kennedy Center in Washington DC, Piccadilly Circus in London and at NASA’s Kennedy Space Center. She has also hosted several events and live TV broadcasts for the European Space Agency (ESA).

Sarah is the author of three children’s book, published worldwide by Dorling Kindersley. Her third book ‘The Space Race’ was been released for the 50th anniversary of the Apollo 11 Moon Landings and features a forward by astronaut Eileen Collins – the first woman to command a space mission.

Sarah launched the book to the edge of space using a weather balloon, to highlight how close space actually is and in the process gained the record for the first ever British Children’s book to travel to space. Sarah has also written about space for a range of publications including the BBC, New Scientist, CNN, The Sunday Times, The Telegraph and the Royal Aeronautical Society.

On radio, Sarah Cruddas’s makes appearances on Jeremy Vine on BBC Radio 2, as the shows ‘favourite astrophysicist’. She has also presented a documentary about space on BBC Radio 4, and is a regular guest across BBC Radio.

Within the movie industry Sarah Cruddas has worked on two documentaries Last Man on the Moon (2014) and Mission Control: The Unsung Heroes of Apollo (2017). She was also the interviewer for famed Canadian astronauts Chris Hadfield’s ‘MasterClass’ available globally online.

Away from space, Sarah’s other passion is adventure travel – exploring our Earth. She has visited over 60 counties reporting from places as far-fetched as North Korea, Tibet, Rwanda, Transnistria and Moldova.

Sarah believes that the exploration of space is the most significant thing we will ever do as a species. Her goal is to inspire as many people as possible about why space matters.

Sarah Cruddas is a highly sought-after corporate presenter, events host and a captivating after dinner speaker. She has also been a STEM (science technology, engineering and mathematics) ambassador since 2009, encouraging children to show interest in science and engineering.

STEM & The Education Sector
Sarah Cruddas is a best selling Children’s factual author, writing books about space published by Dorling Kinderlsey and has extensive experience working with schools and the education sector, from Key Stage 1 to sixth form. She is especially passionate about talking with girls for developing careers in science, engineering and technology, under the STEM umbrella.

Contents for talks with children include astronomy, space, weather, material science, technology and engineering. Sarah also presents careers talks specific to the sciences and talks on how science shapes our world and the importance of science and engineering.

Sarah is able to talk with children about the work she has undertaken reporting abroad and the important role science plays in the developing world - from countries such as Tibet, North Korea, China, Moldova, Rwanda and topics such as farming, climate change, landmine clearing and children in institutional care.

Examples Sarah is able to draw on from her direct experience include all past and present space missions, including space in developing regions a China and Africa and the commercial space industry. Additional examples include work she has done with Sir Bobby Charlton into improving science behind clearing landmines. As well as examples about material science development and how science and technology is shaping medical advances.

Additional topics include travel, foreign reporting and overseas charity work. Sarah Cruddas has worked as a travel writer from countries as diverse as North Korea, Australia and inside the Arctic Circle.

The event went really well last week. Regarding Sarah Cruddas' involvement I simply cannot speak highly enough of her contribution. She made an excellent, speaker, moderator, chair and all round conference superstar. It was a genuine pleasure to work with her and would happily do so again in the future.

It was a pleasure working with Sarah Cruddas to introduce and moderate a discussion with keynote Buzz Aldrin at the inaugural ‘me Convention’, a new collaboration between SXSW and Mercedes-Benz. Sarah was very responsive and decisive which was great given our short timeline. She was organised and communicative throughout the process, which made all the preparations go quite smoothly. On site, she was able to direct the conversation appropriately and engage the audience fluidly, and so we look forward to working with her on future events!

Sarah Cruddas was a real inspiration for the students she spoke to – bringing to vivid life a subject that for many is distant and sometimes hard to relate to.

Sarah Cruddas has an excellent understanding of the UK space industry, she has great interpersonal skills in a way that easily relates to the public and to space professionals, and works hard to promote the success of UK science in a way that is easily acceptable across the media.

Sarah’s wit, charm and dedication towards the grassroots community of space entrepreneurs are exactly the qualities we seek to attract to Disrupt Space. She is already seen as leader in our community. Sarah helped our team in several ways from serving as a moderator for the 2016 Disrupt Space Summit highlight panel to advising the founding team on various topics. Her dedication towards her work is exemplary and we look forward to an ongoing relationship.

It was a delight to work with Sarah Cruddas; enthusiastic from the start, terrifically knowledgeable about space science and professional to the end. It was a great night.

I wanted to say a massive thanks for your input into Red Bull Stratos and you did a great job. The Q&A went really well and I know the guys all had a brilliant time at the event.

Sarah did a sterling job both facilitating the panel and doing her lunch speech. She created a real buzz at the lunch, with people very inspired by her passion and determination.

Clients often ask about purchasing books for giveaways and delegate packs. Below you’ll find a selection of products by Sarah Cruddas. Click the images to view on Amazon's website. For bulk orders, please speak with your Booking Agent.

How to book Sarah Cruddas for your event