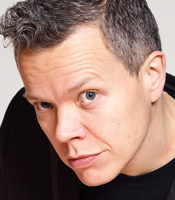 Rob Deering performs stand-up comedy with music, using a guitar, a loop pedal and his voice to create impressive rock and pop soundscapes – and do jokes, of course. Along with being one of the most in-demand headliners on the UK circuit, he's toured nationally and performed solo shows at the Edinburgh Fringe many times since starting out in comedy in the year 2000.

Rob's late-night, live-music pop quiz Beat This is a festival institution. Rob Deering has performed throughout the world, in shows from the Middle East to Melbourne, Shanghai to the South of France, and he has appeared on any number ofRadioandTV shows since starting out on 99 Things To Do Before You Die. Rob also runs – he's running the Virgin Money London Marathon for the third time in April 2015.

Perfect for corporate events Rob is hugely experienced at hosting awards as well as performing after dinner cabaret.

Rob's credits include Celebrity Mastermind, where he got the winning score answering questions about the novels of Jane Austen, Comedy Rocks With Jason Manford, The Weakest Link Comedians' Special, Celebrity Total Wipeout, The Rhod Gilbert Show and The Comedy Club. Rob Deering is also a regular performer at the Edinburgh Fringe Festival, the Leicester Comedy Festival and the Glasgow Comedy Festival.

As sharp and versatile as a Swiss Army knife, Rob Deering is one of the best performers currently on the circuit.

An evening in his company is nothing less than a joy.

The Independent on Sunday.

How to book Rob Deering for your event