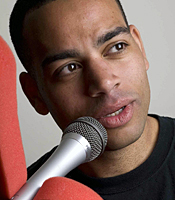 Ben “Doc Brown” Smith began his career in 2000 as a battle rapper, competing in live events such as the now defunct Mudlumz, an infamously tough gig based at the Dingwalls nightclub in Camden Lock. He became a recurring battle champion at the fledgling competition "Jump Off" in 2003, when the now inter-nation event was housed underneath Yo! Sushi on Poland Street in London's Soho.

A chance phonecall from former BBC Radio 1 host and comedy writer Danny Robins, for whom Doc Brown had previously written some spoof music, led to him working as a script consultant on Robins' BBC Radio 4 sitcom "Rudy's Rare Records", a vehicle for veteran comedian Lenny Henry. This eventually led to walk on roles and more editing and writing work on other Radio 4 comedy shows, including "Music Therapy" and "Look Away Now".

Encouraged by producers at the BBC, Doc Brown attended a BBC industry gig in January 2008 at a small venue in London, where he performed a comic song and told an anecdote regarding being the first rapper to work for Radio 4. By his own admission, Doc Brown claimed he ran out of things to say and called for the audience to offer words, names and places, with which he improvised a comic rap. The venue managers were impressed and invited him to perform a short set at a late night variety show named "Spank!"

Doc Brown then entered a national talent competition for comedians called "So You Think You're Funny?" and his third ever stand up gig was in the first round of the competition in spring 2008 at a pub in South East London. Doc Brown eventually made the last eight at the grand final in Edinburgh that August. The performance led to interest from bookers and Doc Brown began a new incarnation as a professional Stand up Comedian in October 2008.

Since then he has performed at the prestigious Edinburgh Festival, debuted his own one man show "Unfamous" which sold out its run at both the Pleasance Theatre, Edinburgh and London's Soho Theatre. He also gave a one off performance of Unfamous at the Elgar rooms in the Royal Albert Hall in March 2011. In April 2011 Doc Brown was invited to take the show to the Melbourne International Festival.

Since moving into the world of Comedy, Doc Brown has taken on various roles in front of and behind the camera in both Film and TV. As an actor he has played roles in the BBC series "Rev" and "Miranda", as well as Channel 4's "The Inbetweeners". Doc Brown also provided voices for the characters Budge and Koggs on the cult CBBC series "Big Babies" for which he also sang the theme tune.

How to book Doc Brown for your event