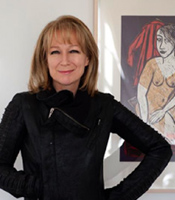 Rita Clifton has been called 'The doyenne of branding' by Campaign magazine, 'Brand guru' by the Financial Times, and the Daily Telegraph described her as 'The Brand Leading the Brands'.

Rita has worked with many of the world's leading companies on their brand strategy, and across all sectors. Clients have included BMW, Rothschild, PwC, British Airways, Procter & Gamble, Marks & Spencer, Barclays, Thomson Reuters, PepsiCo and Visa International. She features on a wide variety of TV and radio programmes on business, brand, marketing and communication issues, including CNN, BBC, Channel 4, Sky and Bloomberg. She has been a regular guest on Radio 4's The Bottom Line with Evan Davies, and on Sky News with Jeff Randall.

Rita has appeared on the TV series 'Business Nightmares' and also the Steve Jobs documentary 'Billion Dollar Hippy', as well as on Murnaghan, the Daily Politics Show and Any Questions? with Jonathan Dimbleby.

Her writing has included the best selling book 'The Future of Brands', and two editions of The Economist book 'Brands & Branding'. She has been a reviewer and columnist for the Financial Times, Management Today and Marketing Week, and is a regular commentator in national and international press and magazines.

From 1997 to 2012, Rita was London Chief Executive and then Chairman at Interbrand, the world's leading brand consultancy, and before that Vice Chairman and Strategic Director at Saatchi & Saatchi. She now has a portfolio of chairing and non-executive directorships, including Bupa, Nationwide, and Populus (the opinion pollster to The Times and reputation research consultancy), as well as chairing the brand firm BrandCap and speaking and writing about brands.

Past non-executive directorships have included Dixons Retail plc and Emap plc. Her pro bono roles include the boards of WWF, of the Henley Festival and as chair of the leading practical sustainability organisation The Conservation Volunteers. She has worked with Sir Jonathon Porritt for many years on environmental and sustainability issues, including as a member of the UK Government's Sustainable Development Commission and the Assurance and Advisory Board for BP's carbon offset programme 'targetneutral'.

She has been on the Advisory Board at the Judge Business School at Cambridge University and was appointed Visiting Professor at Henley Management College in 2006. In 2009 she was made President of the Market Research Society, and is a Fellow of the Marketing Society and the Royal Society of Arts.

Rita Clifton has been voted one of the 75 Women of Achievement in the fields of advertising, media and marketing over the past 75 years, has been named in the Power 100 list by Marketing magazine, and was shortlisted for the Credit Suisse Outstanding Business Woman of the Year. Last but certainly not least, Rita has two daughters.

Rita Clifton speaks around the world on subjects as diverse as leadership, corporate reputation, innovation and communicating sustainability, as well as all aspects of branding and marketing, including personal and nation branding, branding in the digital age and how to build a world class brand.

...the number one star of the day... authoritative... inspirational... thought provoking... brilliant.

The highlight of the conference.

Clients often ask about purchasing books for giveaways and delegate packs. Below you’ll find a selection of products by Rita Clifton. Click the images to view on Amazon's website. For bulk orders, please speak with your Booking Agent.

How to book Rita Clifton for your event