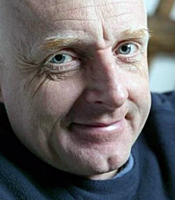 Described as the David Attenborough of the business jungle, Guy Browning is an acknowledged expert on the use of creativity in business. He is also one of Britain’s leading humorists, writing for The Guardian and The Sunday Times and for the BBC.

Starting working life as an advertising copywriter at Darcy Masius Benton and Bowles, where he was responsible for the line "Delicious Meaty Chunks in a Nutritious Gravy", Guy went on to become Creative Director at The Added Value Company, Europe’s largest marketing agency.

Currently, Guy is Managing Director of Smokehouse, an innovation consultancy which helps organisations brainstorm new products and services, new ways of working and new ideas for communication. He’s worked with the giants such as Unilever, British Airways, Sainsburys, Pepsico and Toyota helping them develop new products and successful ways of marketing them. He’s also trained generations of managers to think creatively at some of the UK’s largest companies.

Guy has written many business and humorous books including the best-selling Never Hit a Jellyfish With a Spade. Others include:
• Double Your Salary, Bonk Your Boss, Go Home Early
• You've got to learn to unleash the power of gratuitous flattery, and congratulate your boss on tasks that can be done by a small monkey
• Being nice in business is like being nice on the roads. Everyone likes you but you don't get anywhere
• Never Push When it Says Pull" will attempt to pull off the same success. Other projects in Guy's pipeline include a radio serialisation of his Weak at the Top column in Management Today.

Guy Browning is unquestionably one of the UK’s most in-demand and engaging speakers on the conference and after dinner circuit. He combines the two elements essential for engaging business audiences; a firm grasp of business issues and an indestructible sense of humour.

Widely acknowledged as one of the funniest after dinner speakers on the circuit. Guy slices straight through all the management clichés, reveals the true purpose of conferencing and offers some invaluable tips on how to scale the greasy pole.

With a wide knowledge of different business sectors, Guy is ideal for conference hosting — with his background in stand-up comedy he creates great energy at events!

In his workshops, Guy demonstrates how to use basic intelligence, initiative and imagination to tackle core business issues. And as a keynote speaker he gets back to basics, cutting through the mass of clichés to sort out what really matters from what really, really doesn't.

You were awesome throughout the day and into the evening. Our delegates actually appeared to have tears rolling down their cheeks.

Our performance appears to be unique in that everyone has scored you in the highest category possible.

This was the most wonderful half day of my career at Nationwide. I have taken away so much more clarity of thought and have already put several ideas into place.

I can hand on heart say that over beers at the end you were pointed to as the highlight of the day. Thanks again – it was a great uplift at the beginning of the day, and linked nicely to the innovation in our business.

Your presentation was not only hilarious but was able to deliver a serious business message in a thought provoking and engaging way.

Clients often ask about purchasing books for giveaways and delegate packs. Below you’ll find a selection of products by Guy Browning. Click the images to view on Amazon's website. For bulk orders, please speak with your Booking Agent.

How to book Guy Browning for your event