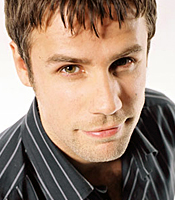 Richard Bacon grew up in Mansfield, Nottinghamshire. In February 1996, he joined L!VE TV as a reporter, a risky job which saw him being banned from the State Opening of Parliament.

He is probably most famous for being a presenter on the children's show Blue Peter, which he joined on 21st February 1997. However, he is more famous for being the first ever Blue Peter presenter in its 40-year history to be actively sacked, after he admitted to taking cocaine.

His career on the show had lasted just over a year and a half when the newspaper News of the World published a report saying that he took cocaine. After his dismissal, the then Head of BBC children's programmes, Lorraine Heggessey, went on air to explain the situation to CBBC viewers.

Since then, Richard has presented such shows as The Big Breakfast (with Amanda Byram), Top of the Pops and the reality TV show Back To Reality. He was a presenter on radio stations XFM and BBC Radio Five Live and on 3rd May 2005 he started presenting the drive time programme 'The Go Home Show' on Capital FM in London which he presented until the end of 2006.

Richard also hosted ITV's This Morning during the summer of 2005, with Denise Van Outen while Philip Schofield and Fern Britton were on their holidays.

How to book Richard Bacon for your event