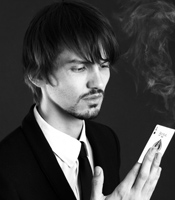 Pete Heat is one of the busiest professional magicians in London, hired by everyone from Coutts to Christie's, from Elle MacPherson to Wayne Rooney, from Soho House to Microsoft.

Pete is trusted by the world's biggest companies because he is a consummate professional, and because, as his various BBC appearances illustrate, his magic is sophisticated, funny and hugely entertaining, without resorting to any of the tired cliches and bad jokes that some magicians seem to rely on. No top hats, no magic wands...if you want modern, edgy and powerful magic that will produce genuine screams, gasps, and laughter from your guests, Pete Heat is the magician for you.

Pete's reputation as one of the UK's top corporate magicians has been built up over years of working for the biggest names in business, from the BBC to General Motors, from Microsoft to the Tate Modern.

Unlike the vast majority of magicians, Pete's magic is fresh and modern. No dad-jokes, no dicky-bows, no tacky props. Just pure magic – direct, visual and impossible.

Pete Heat has performed everywhere, in the most prestigious venues in London (and the rest of the world). From Shoreditch House to the Royal Banqueting Hall,from trade shows in Cologne to New York nightclubs, from Harvey Nichols to Sketch Restaurant.

How to book Pete Heat for your event

One of the UK's leading female magicians and mentalists

One of the UK's leading female magicians and mentalists