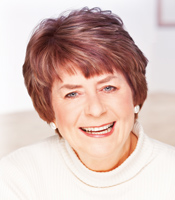 Pam Ayres has been a writer, broadcaster, and entertainer for 40 years, and is one of the few authors who has had books in the Sunday Times bestseller charts in every decade since the 1970s. She is the author of several best-selling poetry collections, including The Works, With These Hands, Surgically Enhanced and You Made Me Late Again! Many of her poems are in school textbooks around the world including the UK, USA, China, Australia, New Zealand, Holland, South Africa, Ireland and Singapore.

Pam’s most recent books have been her autobiography, THE NECESSARY APTITUDE, which was the UK’s best-selling female autobiography in 2011, and in 2013 her book of poetry, YOU MADE ME LATE AGAIN!, which went straight into the Sunday Times best-seller lists.

Funny and approachable, Pam Ayres’ poetry sounds simple, as though dashed off, but this is deceptive. Her hair-trigger timing, her eye for the detail of everyday life, and for the absurdity therein, makes for an art that hides art.

Pam is one of the most popular female comedians performing in UK theatres, selling out everywhere she plays. Pam has also toured Australia and New Zealand since the late 1970s, and is one of the few comediennes to have played the concert hall in the Sydney Opera House.

Pam has performed her solo show at a Private Gala at St. James’ Palace in the presence of HM The Queen. 2014 saw Pam as one of the few British authors who appeared in the Gala Opening of the 2014 Emirates Dubai Literary Festival. 2015 saw Pam appear in front of a packed audience at the Hay Festival, and playing to standing room only in the Comedy Tent at the Cornbury Music Festival.

Pam is a regular on Radio 4’s Just A Minute, and has recently been commissioned by Radio 4 to record the sixth series of Ayres On The Air.

From the moment that Pam Ayres walked onto the Tata stage, she captivated her audience with humour, wit, facial expressions and a perfect sense of timing. I have seen Pam Ayres on television but her impeccable delivery of her material and the twinkle in her eye can only be appreciated in a live show. What was unexpected for me, was the sensitivity with which she described things such as the departure of her son for university, and the arrival of her grandson into her family.

Pam Ayres is the voice of a generation. The generation that loves poems spearing the truth about losing your specs, the first grandchild, and coping when the dog dies.She is a consummate performer, working poems into an effortless-seeming monologue that takes in a very funny reading from her autobiography and various hilarious impersonations. She could give any stand-up a run for their money with her dotty optician, a teenage biker she was desperate to impress at the village bus stop and the thrusting young person tasked by her publisher with telling her about Twitter.Amid the belly laughs, though, were some heartbreakers that silenced the room... in a good way. 'Tippy Tappy Feet' described missing her dog's ecstatic greeting after it dies, and 'September Song' shared how it felt when her kids left home. Sniffle, gulp.Ayres nails perfect rhymes for our times as her blend of comedy and pathos reveal an unerring eye for the truth. She knows what we're all like, from the vanity of contact lenses to the unexpected lure of social media, and offers it up with just the right deadpan delivery.

Clients often ask about purchasing books for giveaways and delegate packs. Below you’ll find a selection of products by Pam Ayres MBE. Click the images to view on Amazon's website. For bulk orders, please speak with your Booking Agent.

How to book Pam Ayres MBE for your event