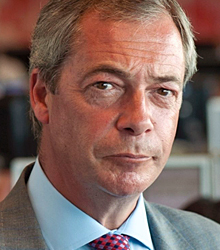 Unlike most politicians, Nigel Farage had a successful career in business before he stood for political office. He gave up that career not to feather his own nest, but to campaign for a cause in which he believed.

As former leader of the UK Independence Party (UKIP), Nigel Farage spearheaded the UK’s Brexit movement and departure from the European Union. He was described in The Spectator by journalist Rod Liddle as “the most important British politician of the last decade and the most successful”.

Nigel is widely recognised as the man whose relentless campaigning forced the ruling Conservative Party, which had been haemorrhaging votes to UKIP, to finally offer a referendum on EU membership before that General Election; a promise they were held to after winning a small and unexpected parliamentary majority.

He served his constituents in opposing the encroachment of the European Union into British public life from 1999 and, apart for a brief break in 2010, was leader of the UK Independence Party from 2006-2016.

With enormous energy, intelligence and chutzpah and a refreshingly unorthodox approach, he built UKIP from nothing to become established as the UK’s third largest party (in the 2015 UK Election) and succeeded in his overriding ambition – to see the UK vote to leave the European Union. In his first General Election in 1995 he received 1.5% of the votes cast, in his most recent attempt in the 2015 General Election, he received 32.4% of the votes.

Upon leaving school in 1982, Nigel Farage followed in his father's footsteps going into the city of London as a commodities trader at the London Metal Exchange. He moved through a succession of trading companies until 2003, all the while maintaining an avid interest in politics that stemmed from his childhood. An active Conservative throughout his latter school days, Nigel stayed loyal to the party until 1992 when John Major's government signed the Treaty on the European Union at Maastricht. In 1993 he became a founding member of UKIP.

Nigel Farage was elected to the European Parliament in 1999 and re-elected in 2004, 2009 and 2014. In 2006, he became the UKIP Leader and led the party through the 2009 European Parliament Election when it won the second-highest share of the popular vote, defeating Labour and the Liberal Democrats with over two million votes. Nigel has been a strong critic of the Euro, the EU's single currency, and has been noted for his controversial speeches in the European Parliament.

Driven to succeed, he seized the moment to lead the political revolution of the British people to an unprecedented and widely unexpected result in June 2016 when the majority of British voters chose to leave the European Union, in what became known as Brexit.

He was shortlisted for TIME Magazine’s 2016 Person of the Year but was beaten by Donald Trump. He won the Lifetime Achievement Award at the Spectator’s 2016 Awards. He has formed a close personal relationship with President Trump having spoken at his election rally in Mississippi. He was ranked second in The Daily Telegraph’s Top 100 most influential right-wingers poll in 2013, behind Prime Minister David Cameron, he was also named “Briton of the Year” by The Times in 2014.

Through skill and sheer determination Nigel achieved his lifetime's ambition of an independent Britain, and rocked the political Establishment across an entire continent. The history of not just the United Kingdom but of Europe and the world is changed because of him, and his place within it is etched in stone.

After Dinner Speaking
In an era of bland and colourless bureaucrats, Nigel Farage is a charismatic and engaging politician who is impossible to ignore. Whilst his political views provoke both controversy and admiration, there is no denying that he’s one of the most fascinating and fun-loving characters in British politics today, and has has enjoyed a thoroughly exceptional career.

A highly entertaining and sought-after raconteur, Nigel Farage is a confident and commanding speaker whose authoritative approach will leave any audience in no doubt that he has something to say and that he will be making his presence felt. As an after dinner speaker Nigel tells his colourful life story with wit, flair and humour; recounted in his unique candid style.

Keynote Speaking
The ultimate personification of the mantra that it only takes one fearless, passionate and determined individual to make a difference, through sheer stamina and perseverance, Nigel Farage evolved from a business leader to a political leader and started the wave against the political establishment.

As a sought-after keynote speaker Nigel’s style is direct, unconstrained, clear, entertaining and compelling. A close confidant of President Donald Trump, his keynote speech offers you a unique insight into the future of US-UK relations within this new world order, and insight into Brexit and Britain’s exit from the European Union.

Clients often ask about purchasing books for giveaways and delegate packs. Below you’ll find a selection of products by Nigel Farage. Click the images to view on Amazon's website. For bulk orders, please speak with your Booking Agent.

How to book Nigel Farage for your event