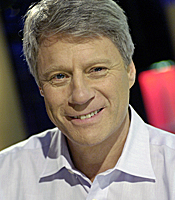 Nick Ross is one of Britain's most experienced and versatile broadcasters. Although best-known for Crimewatch, he has presented, produced and directed many of the key factual series on British radio and television.

He has been a leading broadcaster across a wide range of issues, specialising at various times in news, current affairs, politics, and crime, with several forays into lighter fields including chat shows and quizzes.

In 1997 he was Broadcaster of the Year for his BBC Radio 4 phone-in Call Nick Ross, in 1999 won a Best Documentary prize for a personal account of the troubles in Northern Ireland, in 2000 was shortlisted for a Royal Television Society award for his BBC TWO debate series Nick Ross, and in September 2001 collected Best Factual Programme at the TV Quick Awards.

Nick Ross has gained a solid reputation as one of the UK's best conference moderators and frequently chairs meetings for companies and government agencies around the world. He has a high level of expertise in crime, security and community safety but also a wide ranging knowledge of other policy issues.

Key areas of particular personal interest include health, bioethics and science (and debunking pseudo-science) and he has also campaigned on environmental issues, Northern Ireland, and broadcasting policy.

Crime Prevention & Security
Nick Ross conceived the new discipline of Crime Science and inspired and founded the Jill Dando Institute of Crime Science at University College London, where he is chairman of the board. He is an Honorary Fellow of UCL and of the (American) Academy of Experimental Criminology.

After years presenting the BBC's flagship programme Crimewatch, Nick Ross was disappointed at the failure of criminology to stem crime and sought more practical and scientifically robust ways to cut victimisation. He coined the term Crime Science in 1995 to mark out a new multidisciplinary and evidence-based focus on crime reduction. Crime science is less concerned with political theory, criminal justice or redemption of people than with demonstrably effective and measurable ways of reducing victimisation.

Most epidemics and cuts in crime are explained by changing circumstances in which individuals find themselves rather than by moves to reengineer people or society, so while Crime Science embraces police training, detection methods and forensic science it finds most leverage in improving security by rethinking products, services or policies so as to design out unnecessary temptations and opportunities for crime.

He was a member of the NHS National Plan Taskforce, of the Clothier Committee which first authorised gene therapy in the UK, and of the subsequent Gene Therapy Advisory Committee. He served two 3-year terms on the Nuffield Council on Bioethics, was a member of the Academy of Medical Sciences inquiry into the use of non-human primates in research, and a Director of the Health Quality Service.

He currently sits on other medical and ethics boards including that of the Royal College of Physicians and is Chairman of the Wales Cancer Bank Advisory Board.

A virtuoso performance. You had quite a tricky audience to deal with but you managed it with your normal aplomb and succeeded in impressing everyone there.

One of the best conferences I have been to – well done. I was also particularly impressed, as were all around me, with Nick Ross. He had a stunning grasp of the issues and a superb style in the Q&A with the presenters. I would have liked an opportunity to congratulate him.

Our high expectations were more than exceeded. We had some great feedback! You topped off the first conference day with your fantastic performance – asking the right, sometimes difficult questions about our business and the challenges we face. It was a great pleasure for me to meet you and work with you.

Your boundless energy, pertinent questions and ability to keep everything on schedule was nothing short of masterful.

I just wanted to express my total admiration I have for you in hosting the conference to perfection.

I have been through the feedback sheets from the conference in which your role as the chairman was rightly acknowledged as superb. You were absolutely outstanding and I am not surprised that [the CEO] has sought to book you for next year's conference.

On behalf of the President, the Board of Directors of INSOL International and the attendees at INSOL 2013, I wanted to express our appreciation of your role as facilitator with regard to Day Three of the programme. We received excellent feedback as to your professionalism and understanding of the issues in this role from the delegates and Board. I would also like to say what a pleasure it was to work with you and thank you for your commitment and time taken to carry out the role.Thank you once more for making a very complex Day Three work so well and for entering into the Congress with such enthusiasm, which gave it a real lift.

How to book Nick Ross for your event