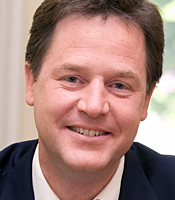 Nick Clegg MP, Liberal Democrat politician, who served as Deputy Prime Minister in Britain's first post war Coalition Government from 2010 to 2015 and was Leader of the Liberal Democrats from 2007 to 2015. He is a Member of Parliament for Sheffield Hallam, where he was first elected in 2005.

Nick studied Social Anthropology at Cambridge and continued his postgraduate studies at the University of Minnesota and the College of Europe in Bruges – where his met his wife, Miriam, with whom he now has three sons. Nick then spent time in New York as a trainee journalist with Christopher Hitchens, as a consultant in London, and in Budapest writing about economic reform having won a prize from the Financial Times. Later Nick moved to Brussels where he worked for five years for the European Commission. His job included managing aid projects in Central Asia following the collapse of communism and acting as a trade negotiator with China and Russia as a senior member of Leon Brittan's office, then Vice President of the EC.

In 1999 Nick was elected Member of the European Parliament for the East Midlands - the first liberal Parliamentarian in the whole region since the 1930s. As an MEP, he co-founded the Campaign for Parliamentary Reform, which led calls for reforms to expenses, transparency and accountability in the European Parliament. He was also the Trade and Industry Spokesman for the Liberal group of MEPs and piloted a radical new law breaking up telecoms monopolies.

Nick lectured part-time at Sheffield and Cambridge Universities before being elected as Member of Parliament for Sheffield Hallam in 2005.

In his first general election as Leader of the Liberal Democrats, Nick Clegg challenged David Cameron and Gordon Brown in the country's first televised Leader's Debates, which led to the largest popular vote for the Liberal Democrats since the party was formed. The election resulted in a hung parliament and Nick Clegg led his party into Government for the first time in its modern history in a coalition with the Conservatives. He stood down as Leader five years later after the party's defeat at the 2015 General Election.

As Deputy Prime Minister, Nick occupied the second highest office in the country at a time when the United Kingdom was recovering from a deep recession. Despite the hugely controversial decisions needed to restore stability to the public finances, Nick Clegg successfully maintained his party's support for a full five-year term of office. During that time, he was also at the heart of decisions surrounding the conflict in Libya, new anti-terrorism measures, the referenda on electoral reform and Scottish independence, and extensive reforms to the education, health and pensions systems.

Throughout his time in office, he made himself more available to public scrutiny than any other senior British politician, most notably through his weekly radio call-in show on LBC 97.3 FM, "Call Clegg", which was widely viewed as an important broadcast innovation. He remains an outspoken advocate of civil liberties and centre ground politics, of radical measures to boost social mobility, and of an internationalist approach to world affairs.

Nick Clegg's mother is Dutch and his father is half Russian, which influenced Nick's internationalist outlook and linguistic ability – is fluent in five European languages; French, German, Spanish and Dutch.

Nick Clegg was awarded a Knighthood in the 2018 New Years Honours for political and public service.

Clients often ask about purchasing books for giveaways and delegate packs. Below you’ll find a selection of products by Rt Hon Sir Nick Clegg. Click the images to view on Amazon's website. For bulk orders, please speak with your Booking Agent.

How to book Rt Hon Sir Nick Clegg for your event