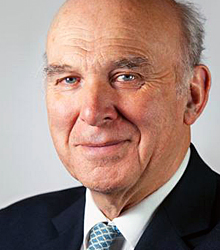 Sir Vince Cable MP is former Leader of the Liberal Democrats and Member of Parliament for Twickenham. During the Cameron-Clegg coalition government he was the Secretary of State for Business, Innovation and Skills from 2010 - 2015. Prior to that he held the position of Acting Leader of the Liberal Democrats for two months in 2007 following Menzies Campbell's resignation until the election of Nick Clegg.

Vince Cable read Natural Science and Economics at Cambridge University, where he was President of the Union, followed by a PhD at Glasgow University. He worked as Treasury Finance Officer for the Kenyan Government between 1966 and 1968. After lecturing at Glasgow University in economics he worked as a first Secretary in the Diplomatic Service in the Foreign and Commonwealth Office (1974-1976).

He was then Deputy Director of the Overseas Development Institute, including a period working for the then Secretary of State for Trade and Industry, John Smith MP, as a Special Advisor. From 1983 to 1990 he worked as Special Advisor on Economic Affairs for the Commonwealth Secretary General, Sir Sonny Ramphal.

Vince Cable was Chief Economist at Shell International and has been Head of Economics at the Royal Institute of International Affairs. He was also head of the economic programme at Chatham House and since becoming an MP, has been appointed a fellow of Nuffield College, Oxford.

On transport he has asked many questions in Parliament regarding night noise and numbers of flights at Heathrow; spoken at the Terminal 5 enquiry and secured a debate to argue for greater weight for environmental factors in airport policy. He chaired the All Party Police Group for 5 years and raised many police issues in Parliament such as gun crime, and more recently the “knives destroy lives” campaign with the Victims of Crime Trust based in Twickenham. He fought the closure of post offices, locally and nationally.

A regular broadcaster, Sir Vince Cable has spoken on many issues such as bank profits, personal debt, and equitable life and The Telegraph described him as “The Government's most trenchant economic critic”. He has written books on Trade Policy and International Finance and published an in-depth study of international telecommunications - Global Superhighways.

In 1999 he published a major book on Globalisation and Global Governance for Chatham House and Brookings. He is very interested in environmental issues and drafted a report for the Commonwealth Prime-Ministers' Conference on climate change and the greenhouse effect. He helped to prepare the report of the World Commission for the Environment with the Prime-Minister of Norway and Commonwealth Secretary General.

His book The Storm: The World Economic Crisis & what it means (published March 2009) was widely acclaimed and correctly predicted the global economic crisis later that year. His next book After The Storm was published in September 2015.

Sir Vince Cable is invited to address a wide variety of audiences, who appreciate his straightforward manner, gentle sense of humour, and the way in which he both delivers his speeches with clarity and answers their questions directly.

Sir Vince Cable is a highly sought-after keynote speaker and after dinner speaker, and audiences appreciate his straightforward manner, gentle sense of humour, and the way he delivers his speeches with clarity and answers their questions directly.

As the Government’s Business Secretary from 2010-2015, Sir Vince Cable provides a unique perspective on the state of the global financial markets and the British economy since 2008, with a previously unreported inside view of the coalition, and offers a carefully considered perspective on how the British economy should be managed, and how Britain can rebalance its economy and earn its keep in an increasingly uncertain global market.

Sir Vince Cable was exceptional. A fantastic fit for the event. Our guests loved hearing him and meeting him. He was so completely “on message” and we have had amazing feedback and follow up.

The evening was a great success and we were very pleased with Sir Vince Cable. His presentation was excellent. Confident, authoritative and the perfect tone for the occasion (pre-dinner). Sir Vince also personalised the content for the audience as identified in the briefing call. He was engaging, friendly, extremely knowledgeable and professional. Sir Vince spent a lot of time with dinner guests and was happy to answer any questions they had. It was spot on.

Sir Vince Cable obviously did his homework on iGATE and provided our client with exactly what they wanted.

We were very appreciative that Sir Vince Cable accepted our invitation to speak. The Conference was our best ever, and feedback is excellent

Clients often ask about purchasing books for giveaways and delegate packs. Below you’ll find a selection of products by Sir Vince Cable. Click the images to view on Amazon's website. For bulk orders, please speak with your Booking Agent.

How to book Sir Vince Cable for your event